So i am going to do a battery relocate to the rear and going to use 4 gauge wire, do you think there will be a slower crank or an issue with charging if i used copper clad vs oxygen free solid copper ??
Top

TL;DR I'd be more worried about the longevity and corrosion with copper clad. It varies wire to wire, but I've read that OFC can carry 25% more current for equivalent I2R losses over a 20foot stretch of wire (this was tested in 1/0 gauge.) That's a fair bit of power loss that I don't want. It'll be a tad more expensive but I'd do the main power wire in oxygen free. Upsize to 2 AWG if you have additional loads like COP, etc.. Both for power transmission as well as longevity. Especially if you have additional loads above stock ECU (I'm running my ignition coils off of it in the engine bay, standalone ECU, that I want voltage stability for, additional sensors, wideband, and a CANBUS gauge.) I've learned that electrical problems are a bear to troubleshoot at times and I'd rather spend the money to do it right the first time. OFC once is cheaper than doing CCA twice.

Long answer;
The big thing I think that makes a difference with the starter is properly rewiring it, which I don't think most people do. I ran my 2 gauge power wire to a termination block on the passenger side of my firewall. From there, it goes to 3 places; 1-8 gauge wire goes straight to the starter, 1-8 gauge wire goes to my engine bay fuse box, and I have a smaller 12 gauge wire going to switched 12v power to my ignition coils. I also ran a new wire directly from my alternator to the fuse box. My system sits at 14.6V when I first start up and It'll get as 'low' as 13.8 on longer drives but it's incredibly stable in my opinion.

Here's a crap drawing of what i mean;

I have a few in-process pics of when I cleaned it up a few years ago.

^One of the wires connects on the bottom side of the post that red wire is on. The red goes straight to the charging post on the alternator. 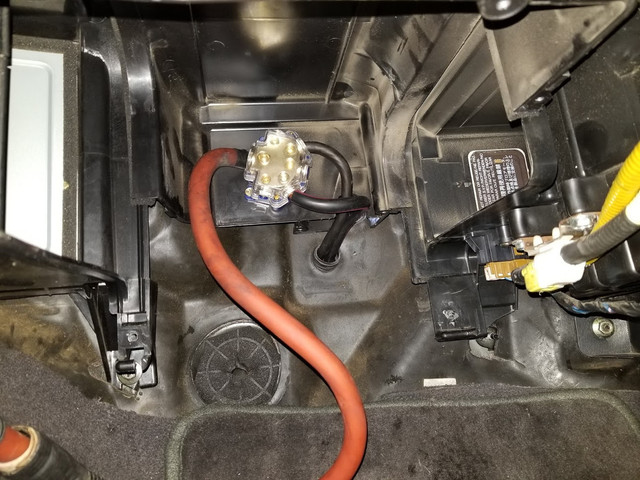 ^I don't have A/C so I just tucked it up in the plenum. you could hide it behind there. I just liked the idea of keeping all of that out of the elements in the engine bay.

And proper battery terminals. These are what came on my Camaro and I actually like them a LOT. I've had them on for over a year now in my trunk. No corrosion. No issues. I remove the negative on my battery often to work on stuff. The 10mm nut makes it a breeze and I get a good firm connection when I'm reinstalling it, without having to pull it on and off of the actual battery terminal itself.

I got the same exact oil catch can in the same exact spot of my 240 ... lol ....
I got 4 gauge copper clad on my 240 now from the back to the front and it cranks just fine. No issues.
I guess what i could do is just buy the solid copper line and do a test crank with it on the 240 to see if it cranks any faster ... if it does sweet, if not oh well. This battery relocate is for my Supra.
Top

Nice haha. I scrapped that catch can and am running 2 separate ones now actually. You probably won't see much of a difference cranking, it's just going to generate a lot more heat from current while in use. Which is wasted power. As long as your alternator is keeping the battery topped off, send it.
Top
Post Reply
4 posts • Page 1 of 1