500hpKA240sx wrote:I agree with supakat if you dont want scoops or possibly put hood spacers in the back i personaly dont like them but rather have that then it rubbing and lmao at the hulk foot

I dont want to come across as saying no to everything

but the cam cover / turbo are quite far forward meaning the bonnet (front hinged) needs to be raised a long way to not rub.
by MRLuke
Progress !!

I know it has been ages, long and short is engine mounts are a bit of a pain and ive been slow, but theyre nearly done now..

Intercooler arrived today pipework / bends are from a CA hence the weird cold pipe but it is starting to look like it should be finished soon, it fits and the bonnet even shuts :O

Hope to have it running within in a month, once the mounts are done then expect lots of progress. Need to make up a triangular flange on this end to pick up the bolt holes above, bottom left and bottom right. Still drivers side mount, just clears the oil filter and just clears the starter.

by MRLuke
A bit more progress over the weekend.

Turned it into this:

And then this happened:

Theyre just tacked together at the moment, taking them over to a friend to be welded properly during the week

I've ordered all of my intake / intercooler / fuel / rad hoses so should have them for next weekend. Cost a bloody fortune though.
by MRLuke
Nobody will believe the amount of unaided work that has gone into getting to this point from somebody who hasn't done anything more than an oil change.

This weeks job is to refit the engine to line up the drivers side engine mount so I that I can drill the chassis in the right place.
by MRLuke
Got a bit more done today and I can finally say..

Final test fit of the engine on both mounts all bolted up with about 10mm clearance on the lower subframe.

Next job was to take the engine back out so I can paint the mounts and chassis rails then its onto the gearbox mount which will likely be a piece of box section. Also got a small delivery from Driftworks

Poly gearbox mount and a clutch line as I am converting from a cable clutch to hydraulic.
by MRLuke
Update time

Air filter arrived along with some hose clips and flexi hose for the radiator. Apparently flexi hose isnt very flex though so I need to get a couple of 90 bends and joiners before I can finish the plumbing.

Ripped out most of the existing wiring as it wasnt at all healthy.

Inside is looking a bit cleaner now and ive refixed the steering wheel / pedals ready to sort out the clutch however it appears the DW clutch line isn't going to be long enough to mount the master cylinder where I want it. Another thing to go on the list of ordered in error lol.

Last bit of fabricating (i hope) is to finish the gearbox mount, need to take about 10mm off the end of the box section then will attach some plate to the end and bolt between the chassis rails. This will also help to stiffen the chassis up as there aren't many joins between the rails.

Wrote out a list of parts to buy and jobs to do before its finished and got depressed.

Going to need a full suspension overhaul to get it back on the road as MOT has now expired and all of the bushes / are shagged as well as the shocks.

By the time im done the only bit that will be left of the car I bought is the bodyshell. So much for a cheap simple drift car.
by esahuque
looking good but you need to move your MAF atlest 12 inches away form your turbo or its going to run like **** and stall on you.
by MRLuke

esahuque wrote:looking good but you need to move your MAF atlest 12 inches away form your turbo or its going to run like **** and stall on you.

thats going to make for some interesting pipe routing.

Can I ask why it doesnt like being so close?
by beercandrifter
turbulance, fwiw i had mine 6" away on a 45* bend and it was fine
by MRLuke
Thought it was time I updated this a bit.

Car is currently with a garage who are tidying up my DIY efforts and finishing off what is left.

They have lowered the engine about 2" as it was sitting too high.

Comparison is a bit misleading as the before shot has the rad, intercooler etc in but you can see the difference by the angle of the cam cover. Also notice how much closer the turbo is to the chassis rails.

Other things they have done are

You can see the cutout for the exhaust which is the next thing on the list along with a swirl pot and new fuel lines.

Couple of developments my ECU had a daughter board in but for whatever reason this is now dead so will be going nistune. Also turns out that the engine has had a fresh rebuild so thats a plus.
by MRLuke
More progress

by slidewayzagain
That is some serious work u put in there. I like it.
by supakat
Good stuff. Where did you get the fuse box? Looks really good.
by MRLuke
Cheers guys.

Not sure where the fusebox comes from im afraid.

The idea is to run the engine as if it was in a nissan rather than a new standalone setup. Shame about the ecu as I wasnt ready for nistune yet but oh well.

Found the engine has had a recent rebuild as well so thats a plus.
by sdaigle240
so sick!

The garage think the maf will probably be okay as its only a small turbo (they say lol). I dont think I can run 20psi on a stock engine, limit is about 14 isnt it?

Will have no tune to check that the engine works and the car moves running wg pressure only. Wont be driven like this. Then its going nistune once ive saved up.
by airman
Regardless of turbo size (well, within the range of our application), the MAF is going to be affected right there. I'd have them move it after the bend and closer to the filter!
by MRLuke
If its a right pita then we'll probably just go for megasquirt instead.
by schmauster920
Turn the intake pipe around so the maf is right behind the filter, it will be much happier
by MRLuke
Best update

quality is awful but, it runs! Just on standard ecu atm so is pig rich but still. WOO

Car is now back with a new builder who has had it since around summer last year.

i'll let the pictures do the talking on progress. 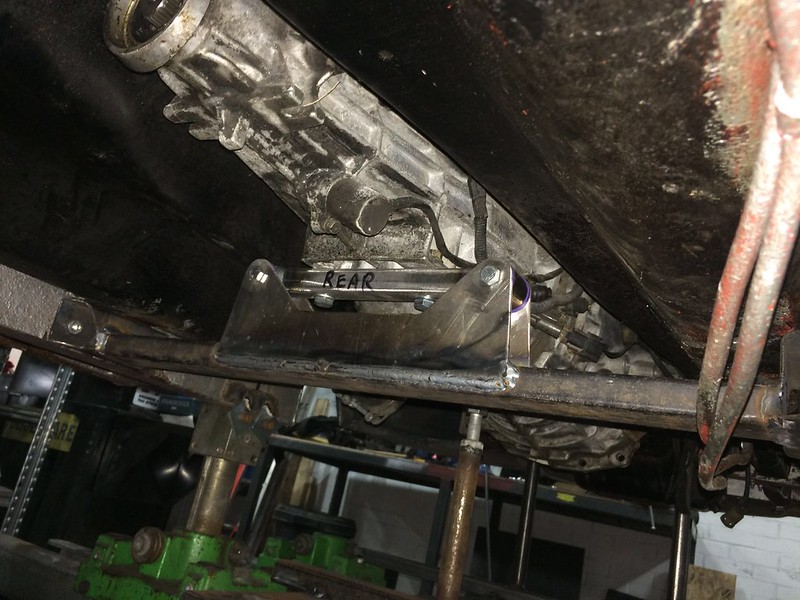 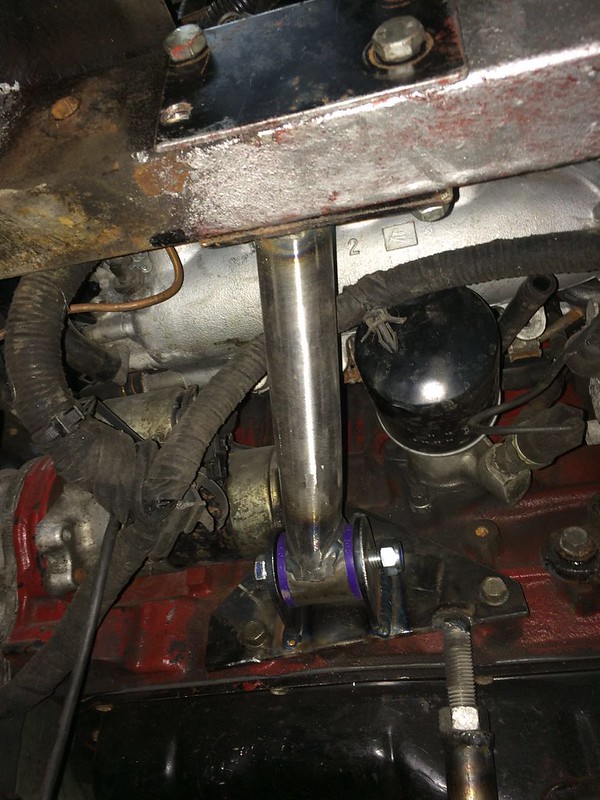 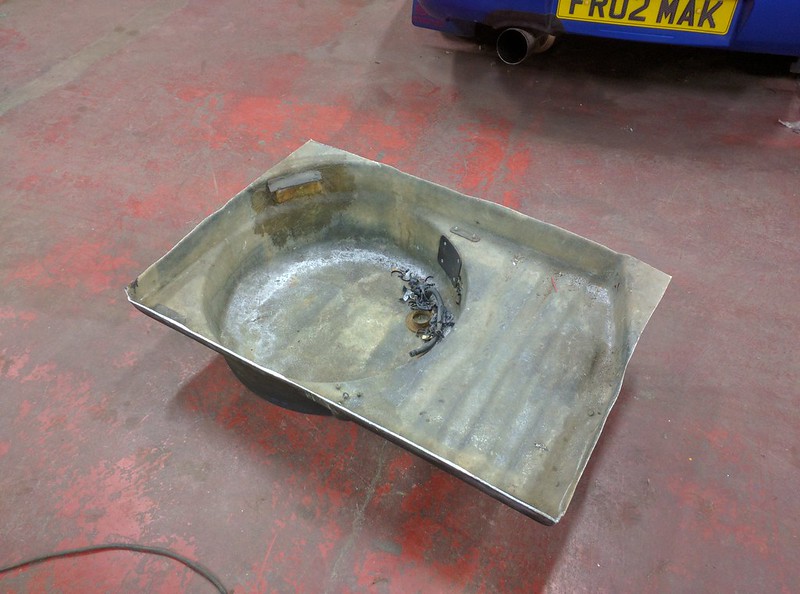 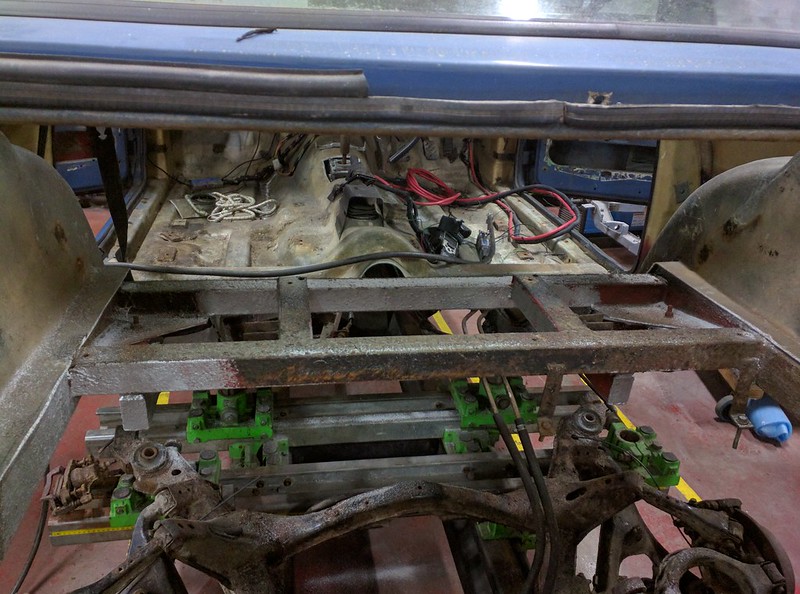 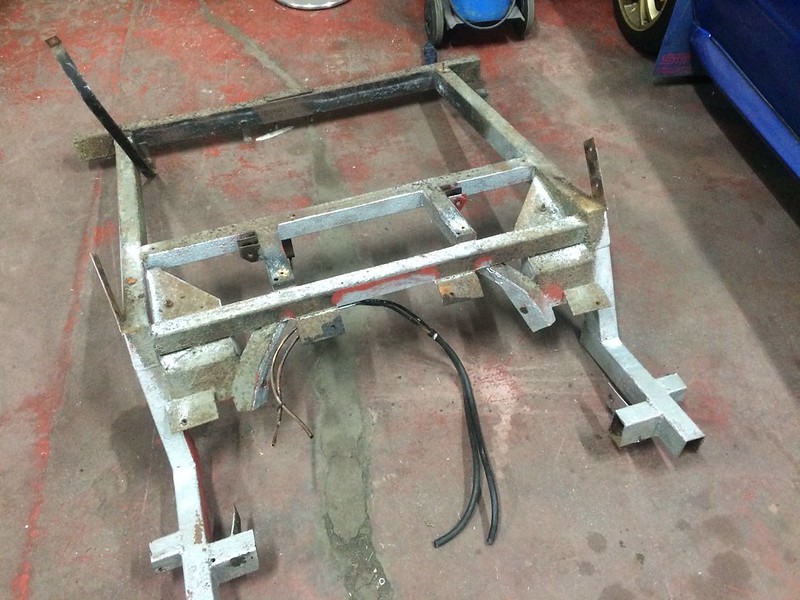 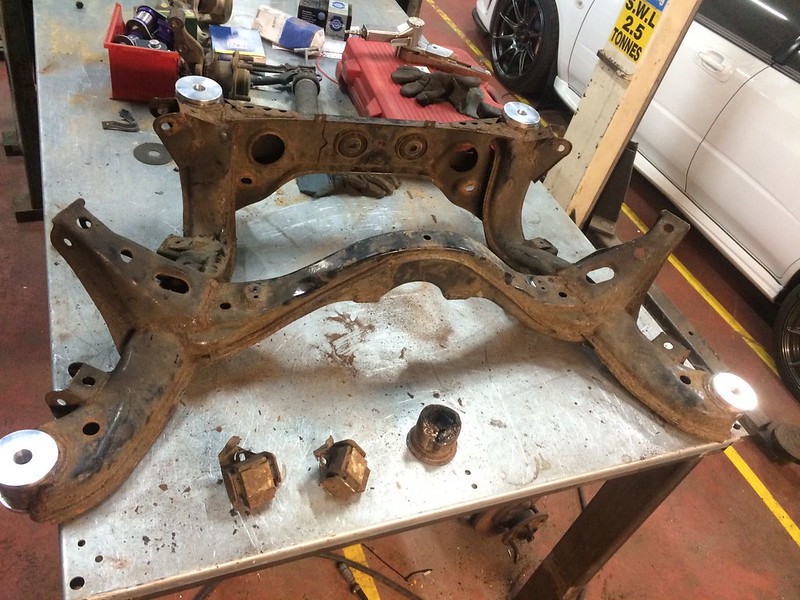 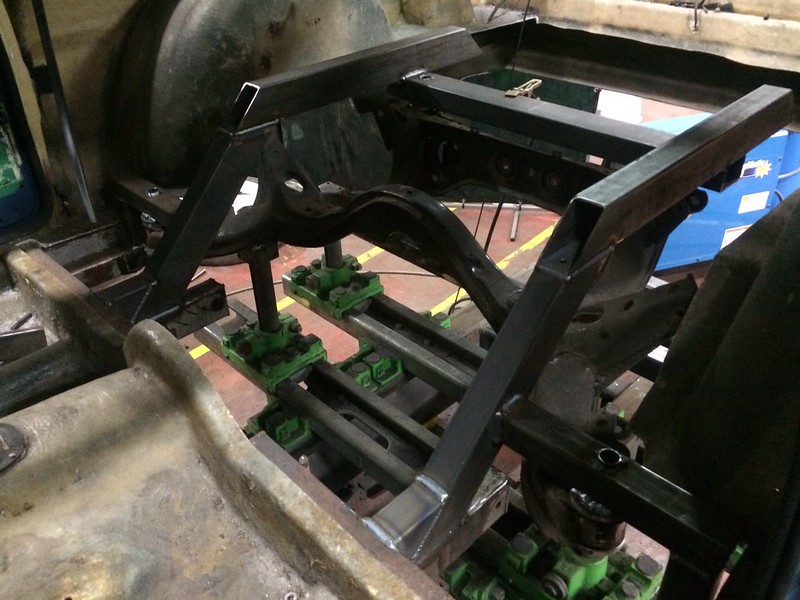 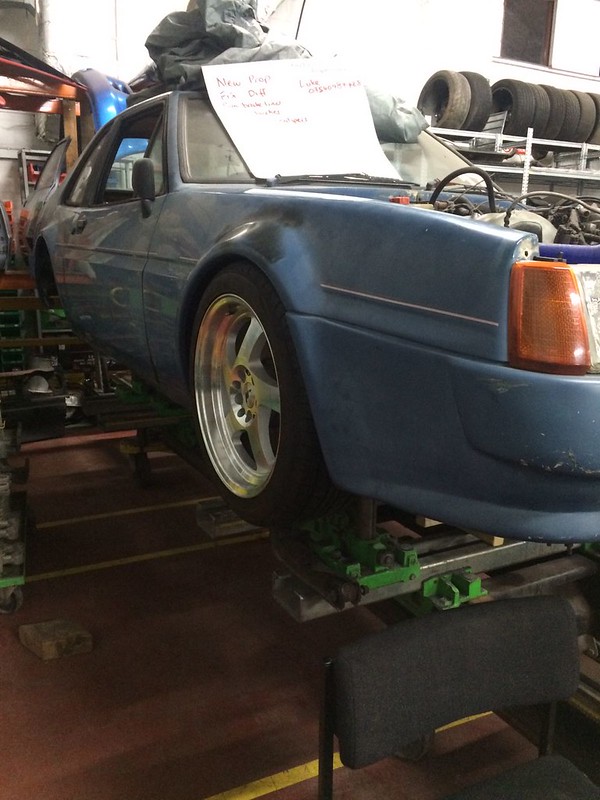 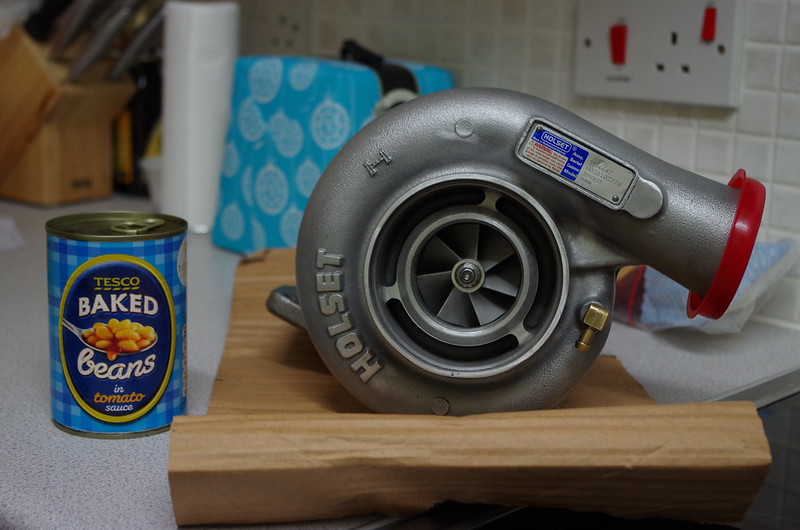 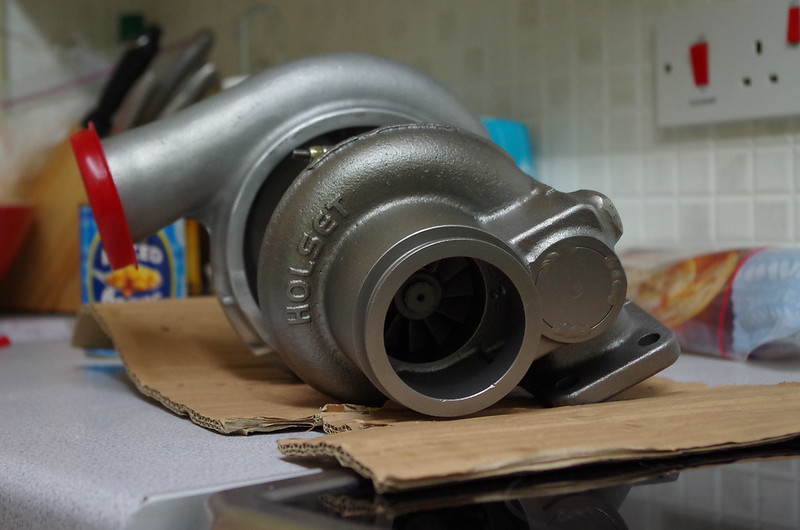 Thats a holset Hy35 with a 10cm T3 turbine housing.

Which brings you pretty much up to date.

I have been holding off updating until there was some more engine progress but we are slowly getting there. Just waiting on a full redesign of the front suspension and installation of the roll cage, then we can start sorting the noisy bit out