This is for all those PICTURE THREADS ONLY. Motor installs, product writeups, showing off your car, put the thread in here.
Post Reply
8 posts • Page 1 of 1

Hello everyone and thanks for dropping in to take a look.

Step 1: Acquire 240sx. My itch for another 240 began after stumbling upon Jimmy Oakes on youtube. I think I made it something like 90 days before I was dead set on ruining my life. I searched for the right car for approximately a year before finding this one. The right car for me was one the didn't look molested for under $2000.

9-18-2018
I found this car crazy close considering my search radius was the east coast, only two hours away. It was a non running car with a spare motor from an auto car. I jumped on it the moment the car was posted and not long after I was off to get it with my trusty side kick Greg. Without this man, none of this would ever have gotten off the ground. We scoop the car and head back. The truck is Greg's. 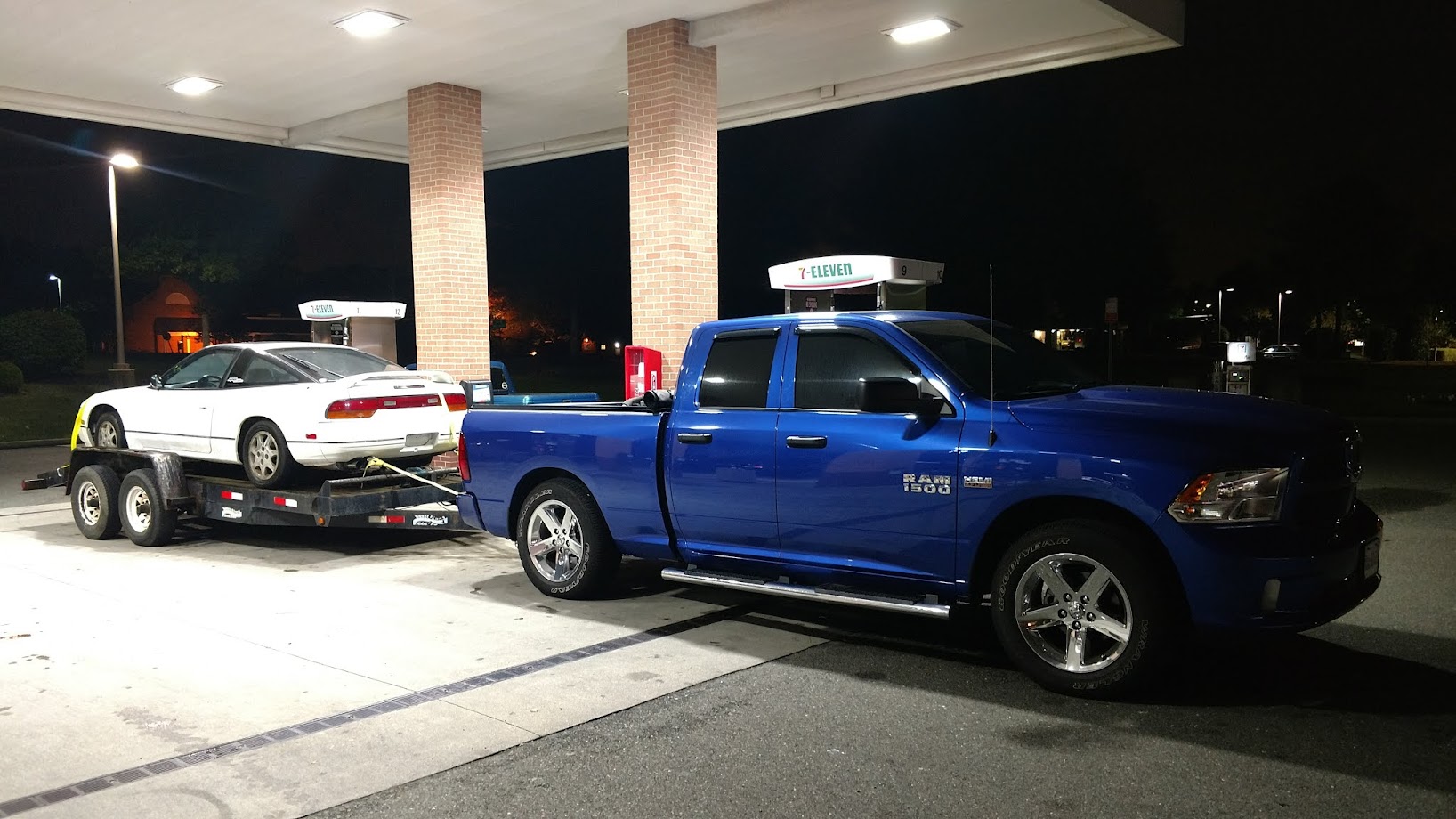 The previous owner had told us the spare motor should run, we've all heard that one before. The original motor had a bad knock, something I am far to familiar with on these motors. We decide to chance it and swap the spare in untested, its only a few hours of time to find out right?! Luck was with us and the motor ran pretty well! 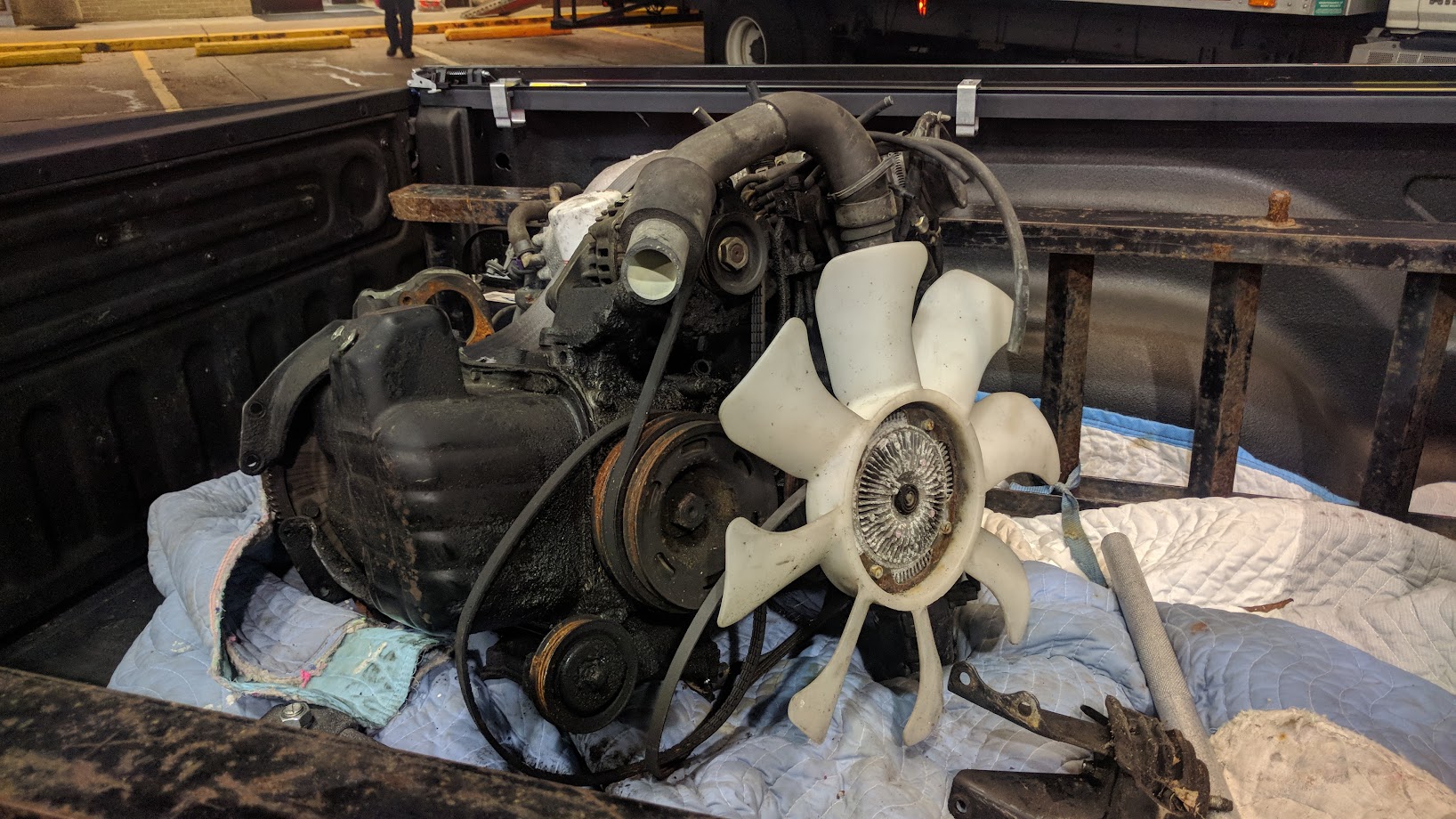 Spare motor that I did not have much hope for when we first got it. 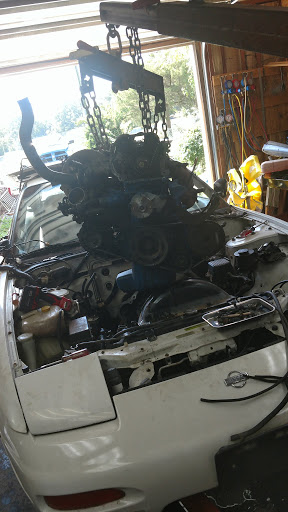 Greg solo pulling the blown motor while I was at work.

I don't really have many photo's in between Greg pulling the motor and the spare going in with help from our friend Joe. It all happened so fast, we pressure washed the car while the motor was out and it was back at my house and running on the 25th. Only 7 days later!!!! I couldn't believe it. 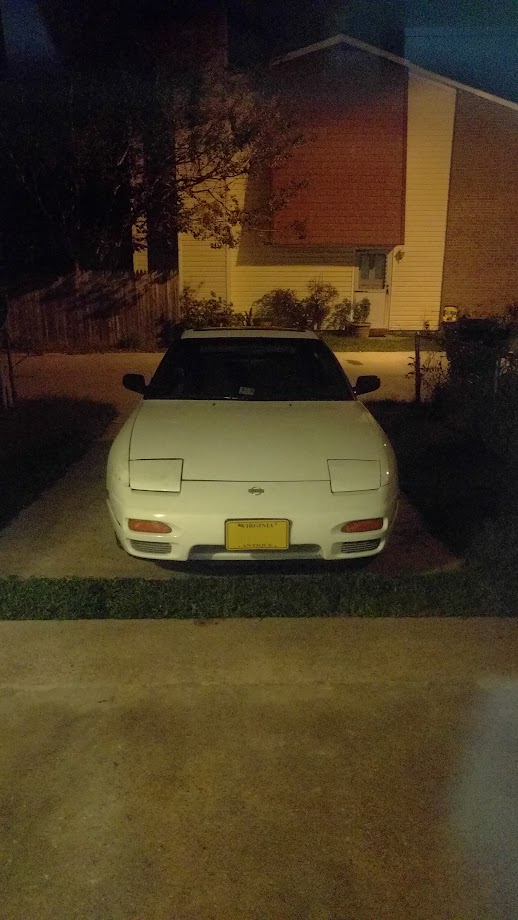 Now that the car was running and driving I learned the rear suspension was shot. I assumed the subframe bushings were gone just from reading. I ordered some KYB struts for the rear and some Nismo subframe bushings. I never got around to installing these during this time frame. Besides the wheel hop I was pleased and it was more than I had ever anticipated by this time. A few days after having gotten the car back to my house I started cleaning the interior the best I could. 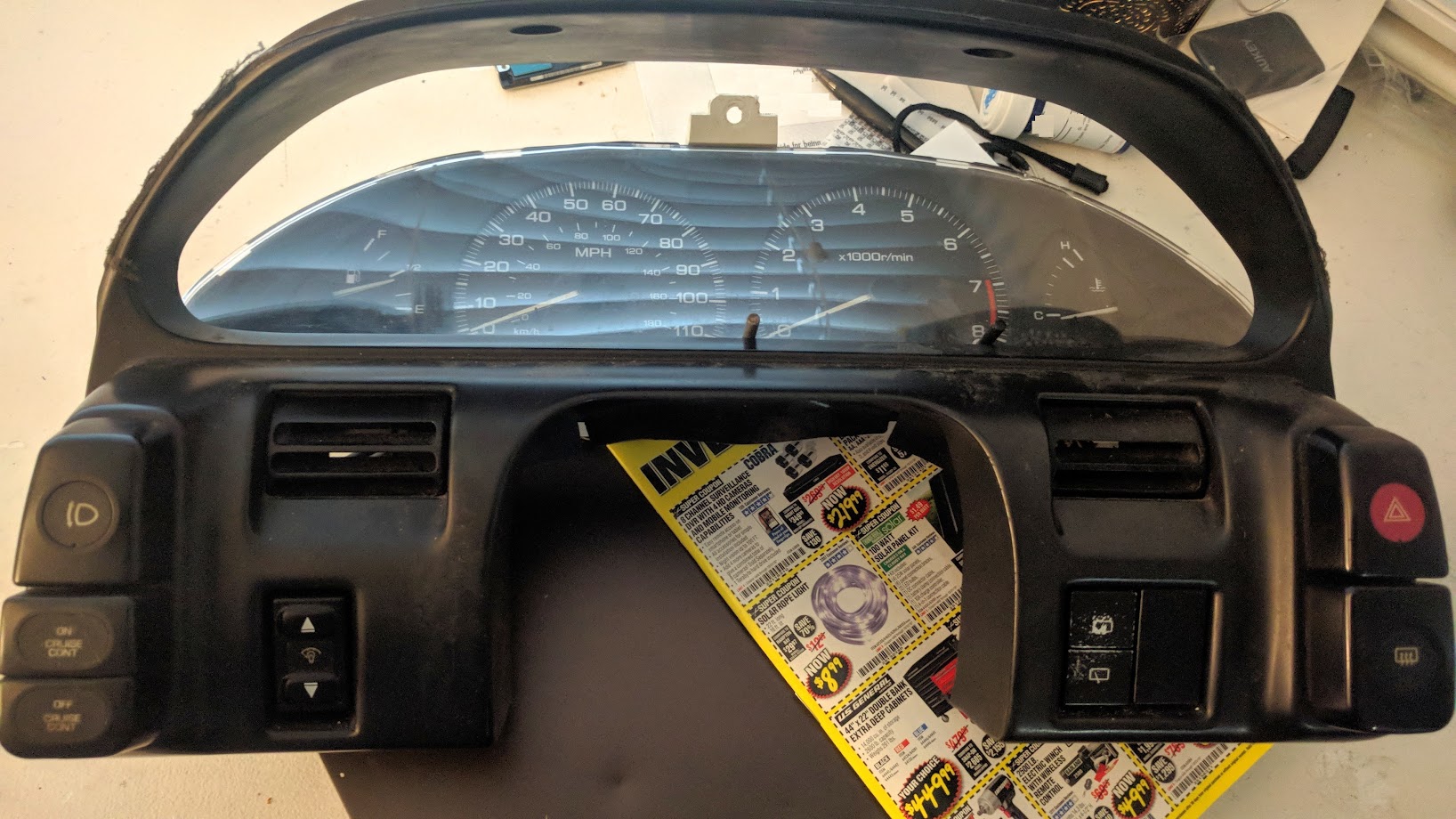 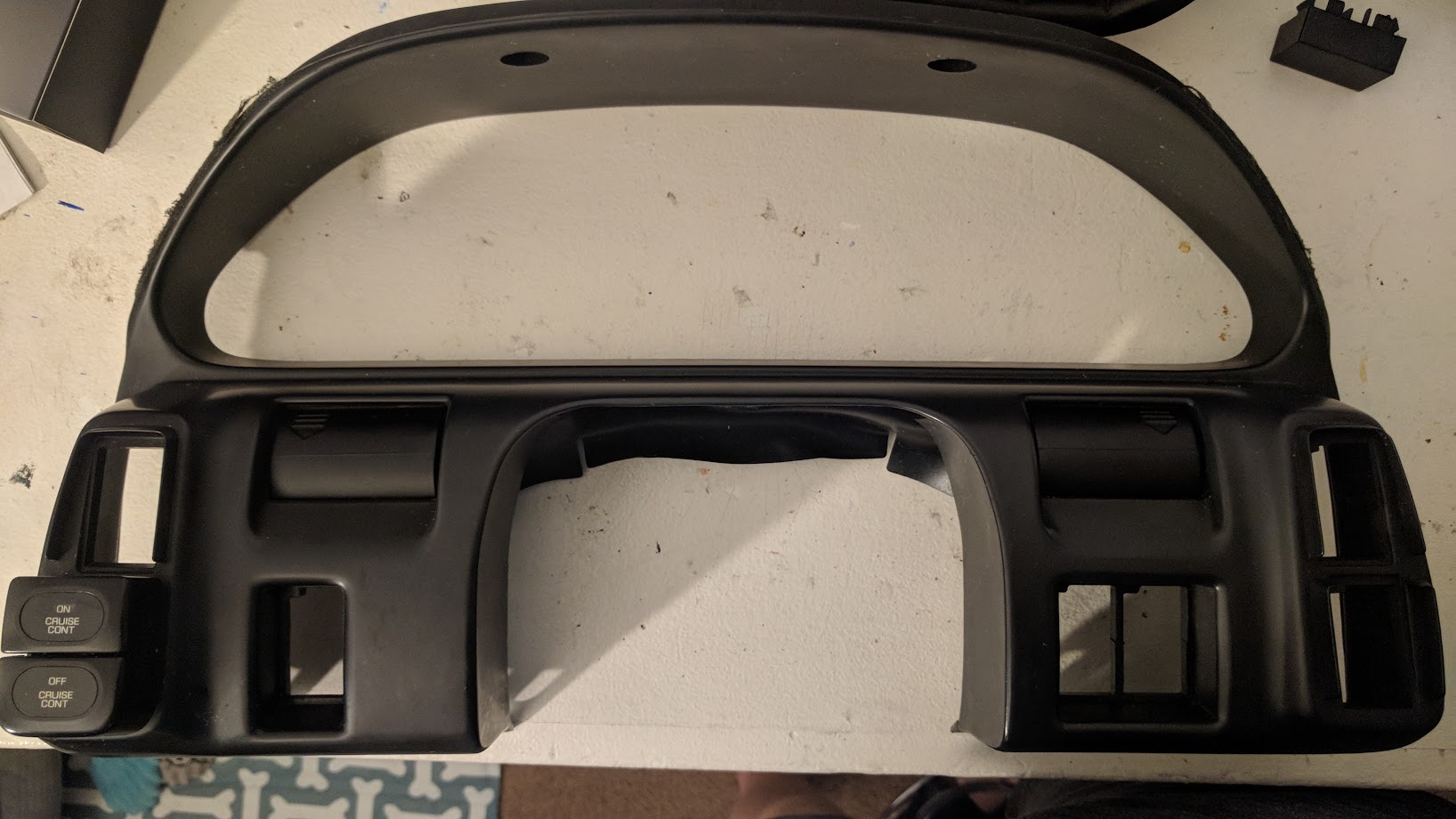 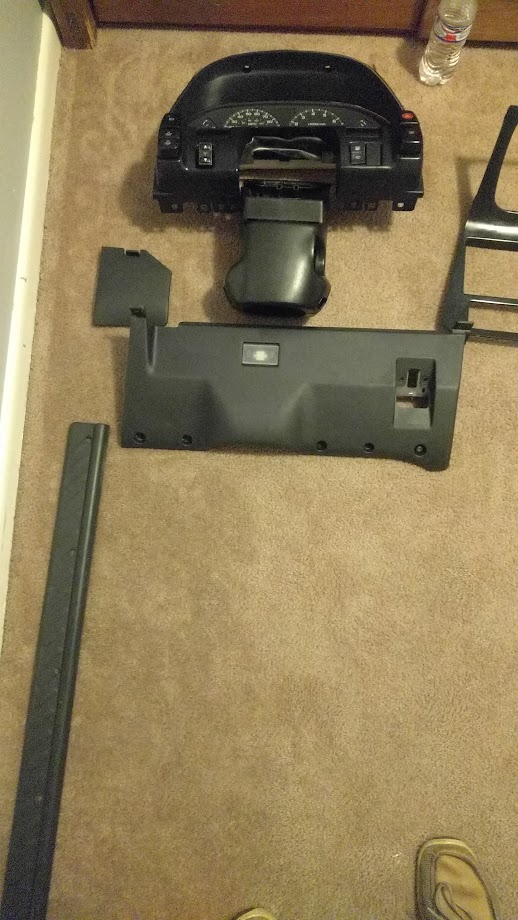 The next day after cleaning up the interior a bit I get an email alert I had setup for a 95 J30. Time to go get a VLSD! My plan here was I hope that between using rubber bushings and not solid, and having a plan to swap the transmission hopefully far far from now, the rear seal would hold together long enough to enjoy it. This too did not get installed during this time. 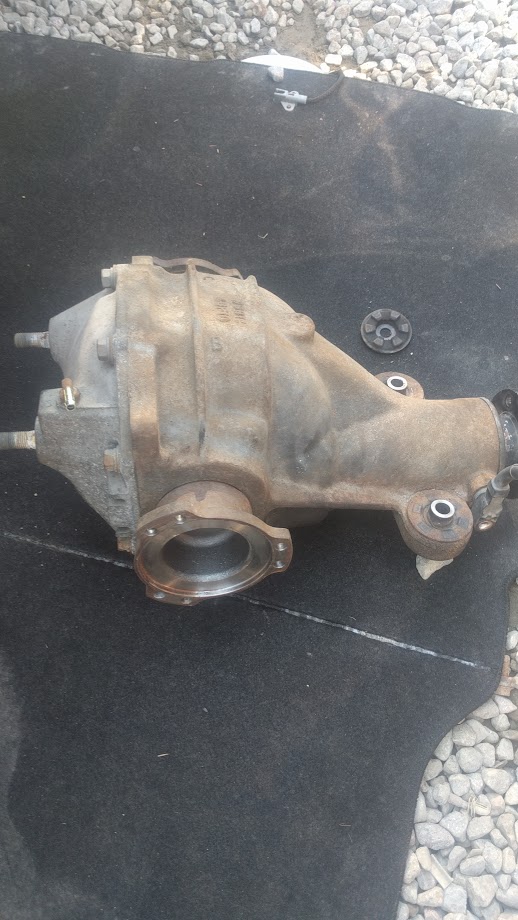 Moments after it landed on my chest.

After getting the few things listed above I just drove it around not having installed them yet. I was enjoying my 30 minutes after work each day far to much to put it under the knife just yet.

I'm fuzzy on the dates but thanks to timestamped photos it looks like I decided turbo dreams needed to happen around January of 2019. I just wanted to get my toes wet in the world of Megasquirt and turbo at the same time. I had been reading about and following the progress of Megasquirt since it first came out and it's something I really wanted to do on this build. I picked one up, installed it (Not really understanding a lot of what I was supposed to do, or the impact of not doing certain things). I drove the car around on Megasquirt and NA for a few more months while collecting pieces for a SR20 setup with ebay manifold. 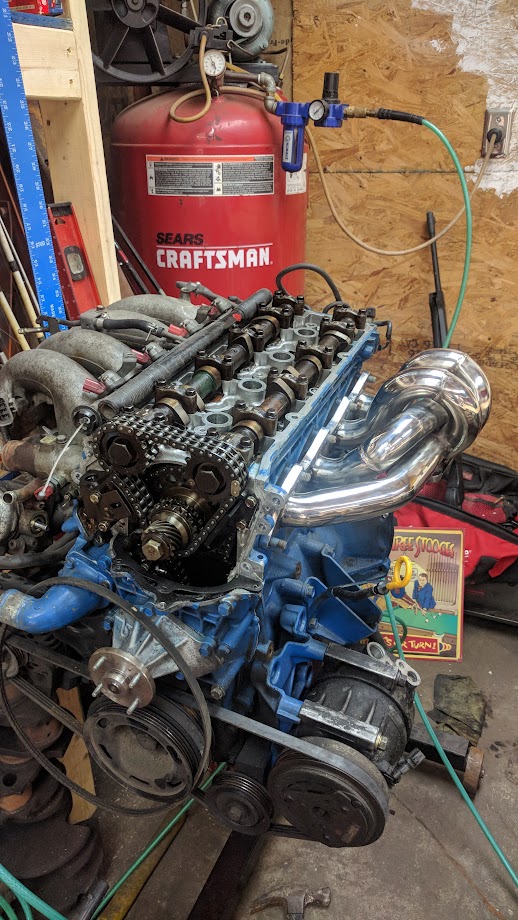 Hanging on the spare motor. 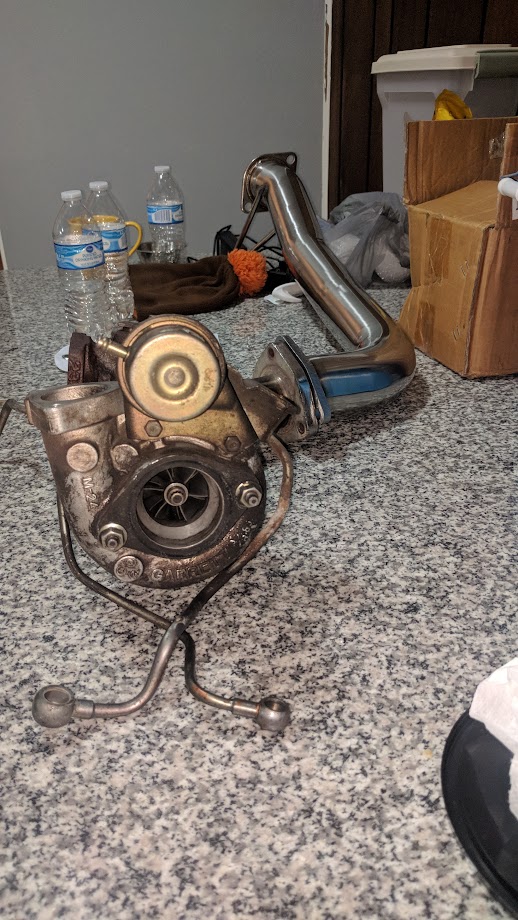 Dirty but no shaft play and what would become my downpipe after modifications.


While acquiring parts I began to clean up and modify the intake from my spare motor. Per the research I had done it seemed the best choice for me was to weld up the intake and remove the emissions items. 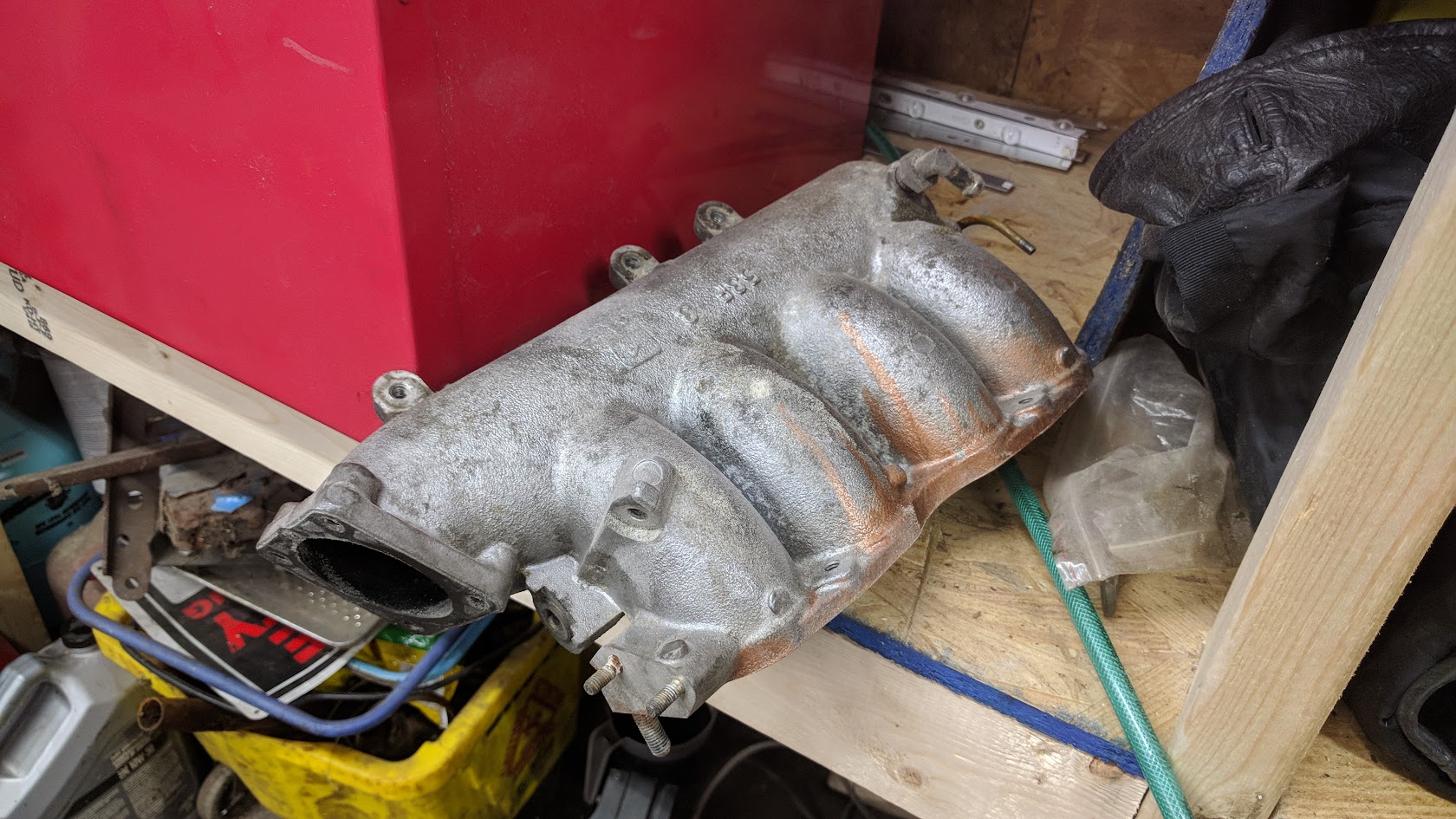 Greg has a sandblaster and we were quick to acquire an oven so that we could powder coat in the garage. 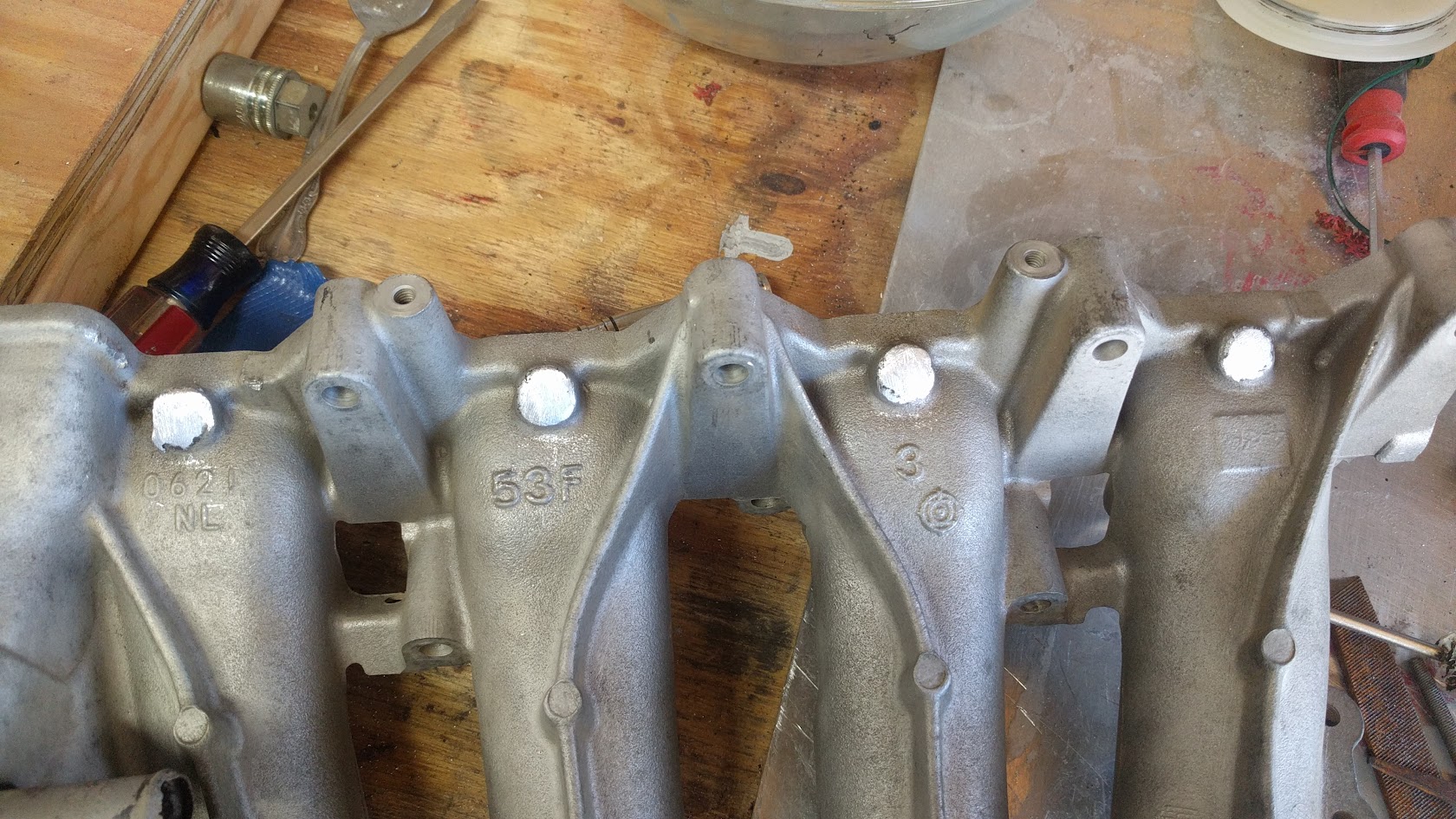 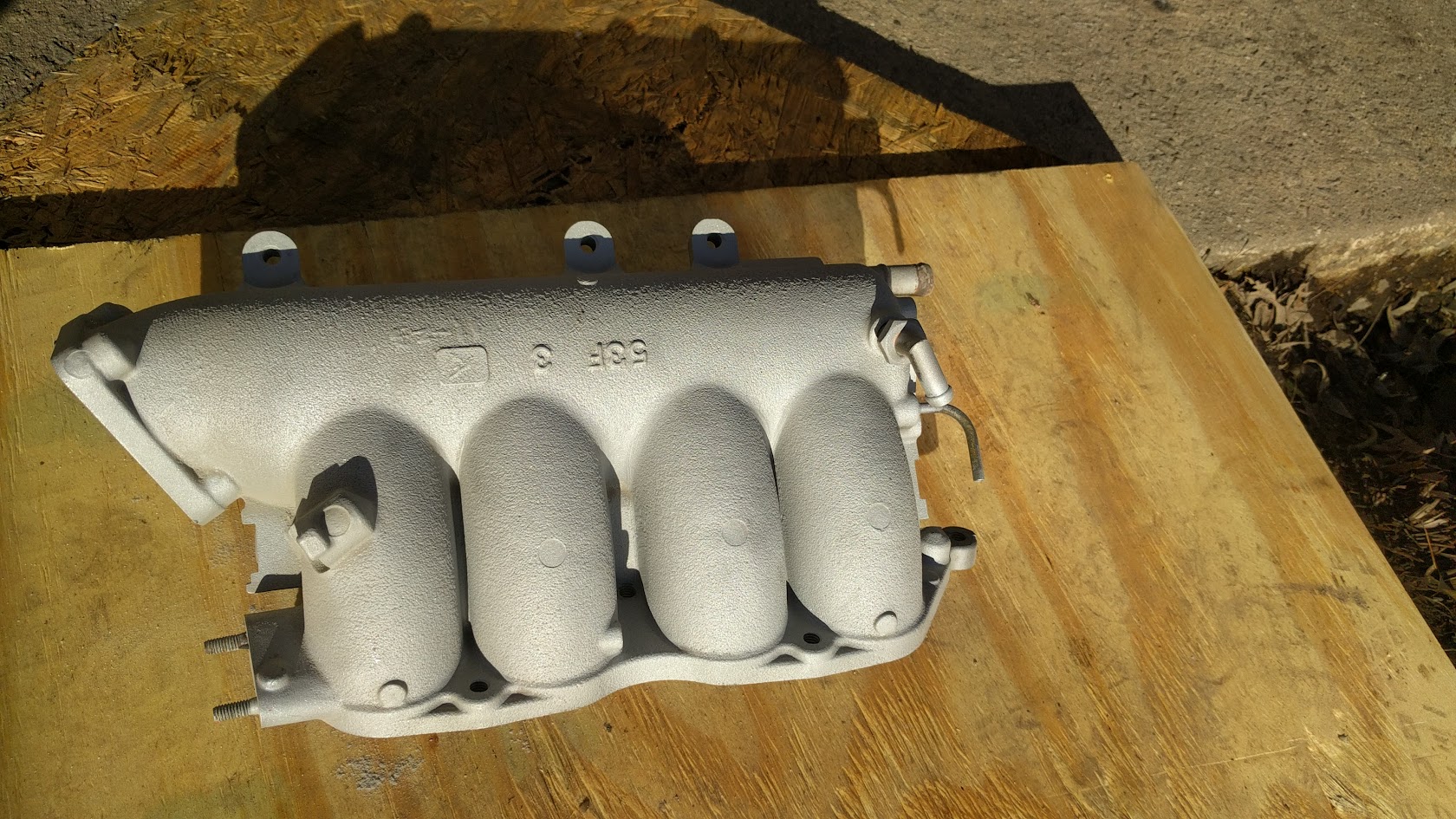 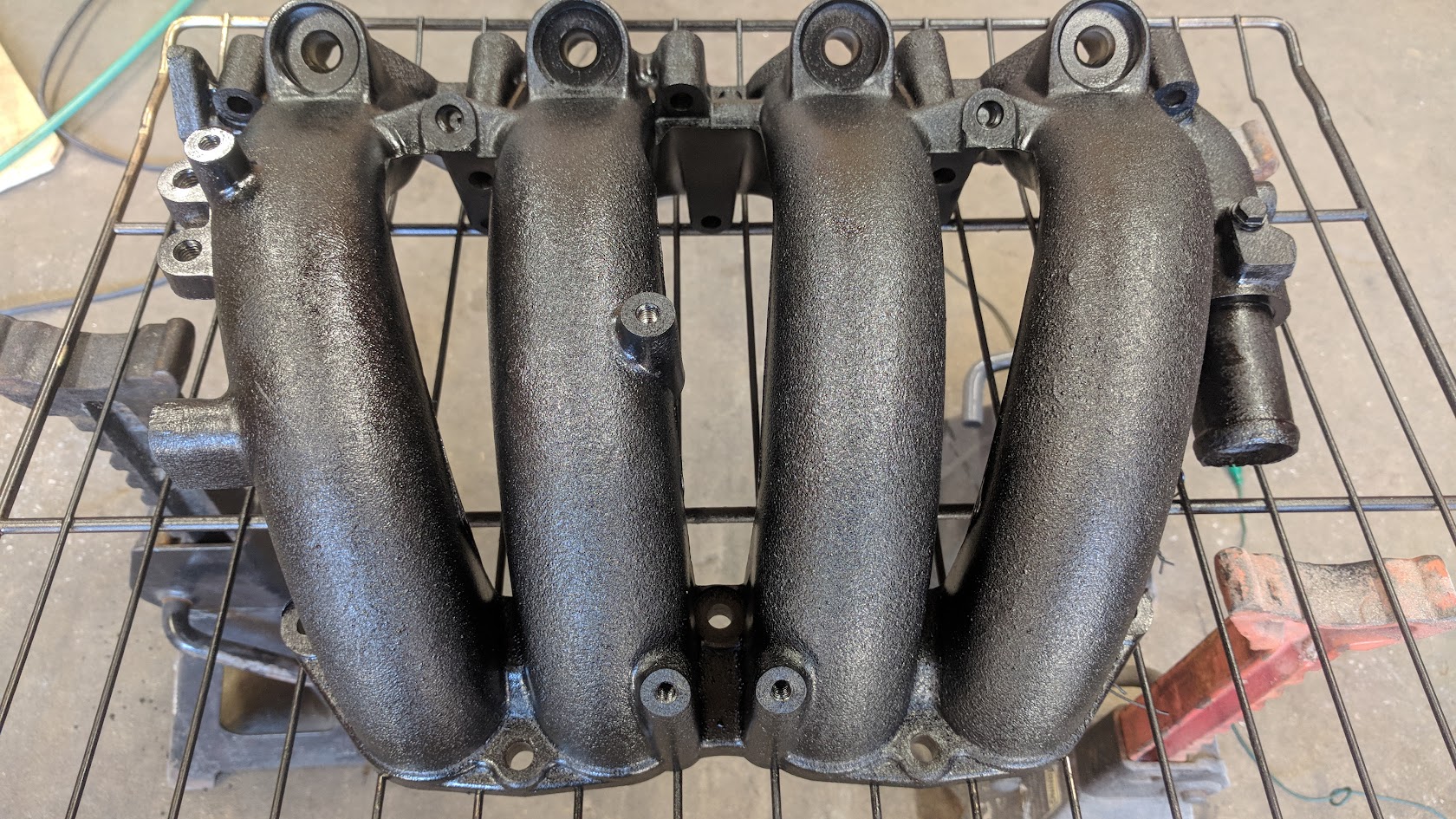 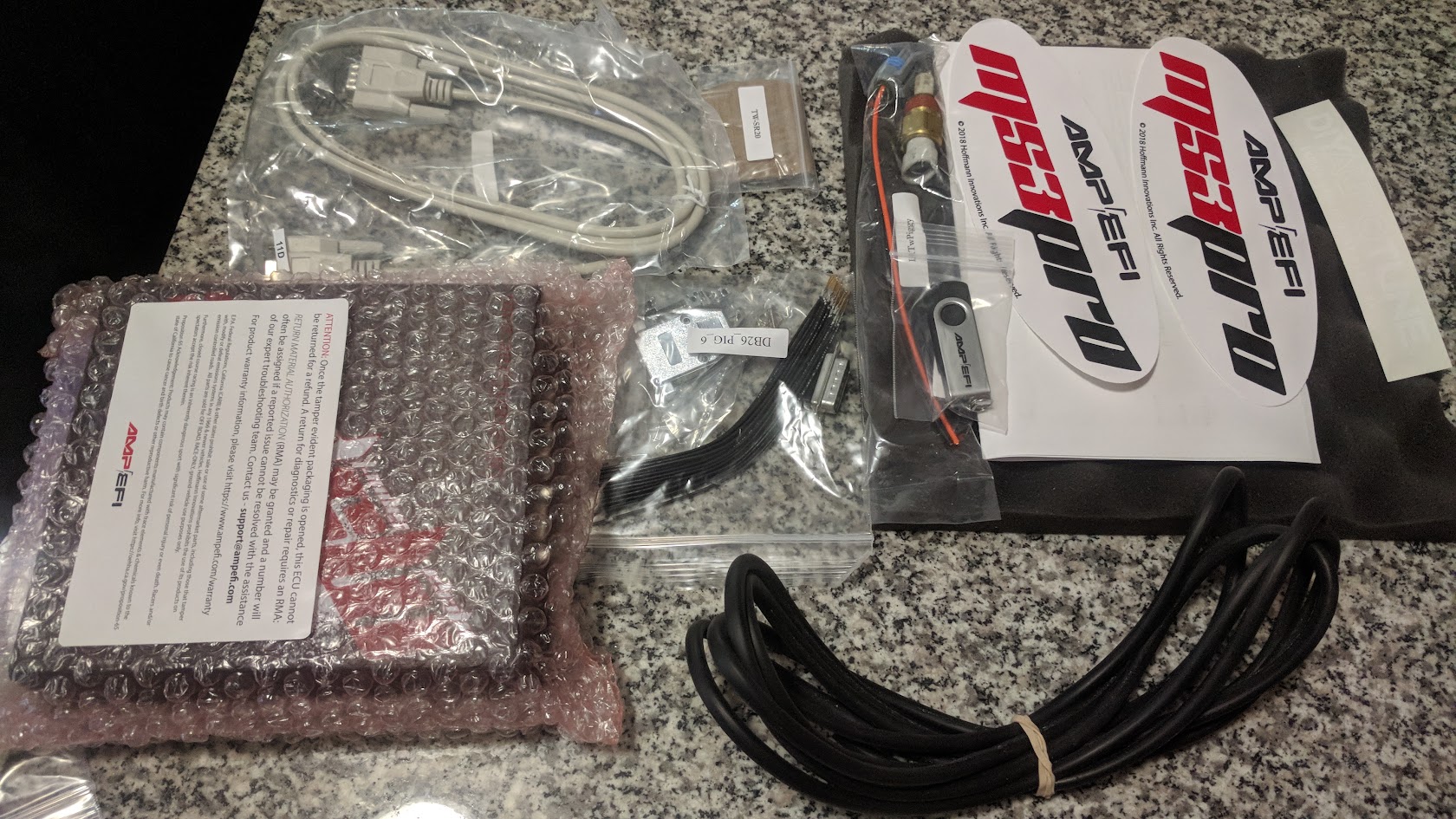 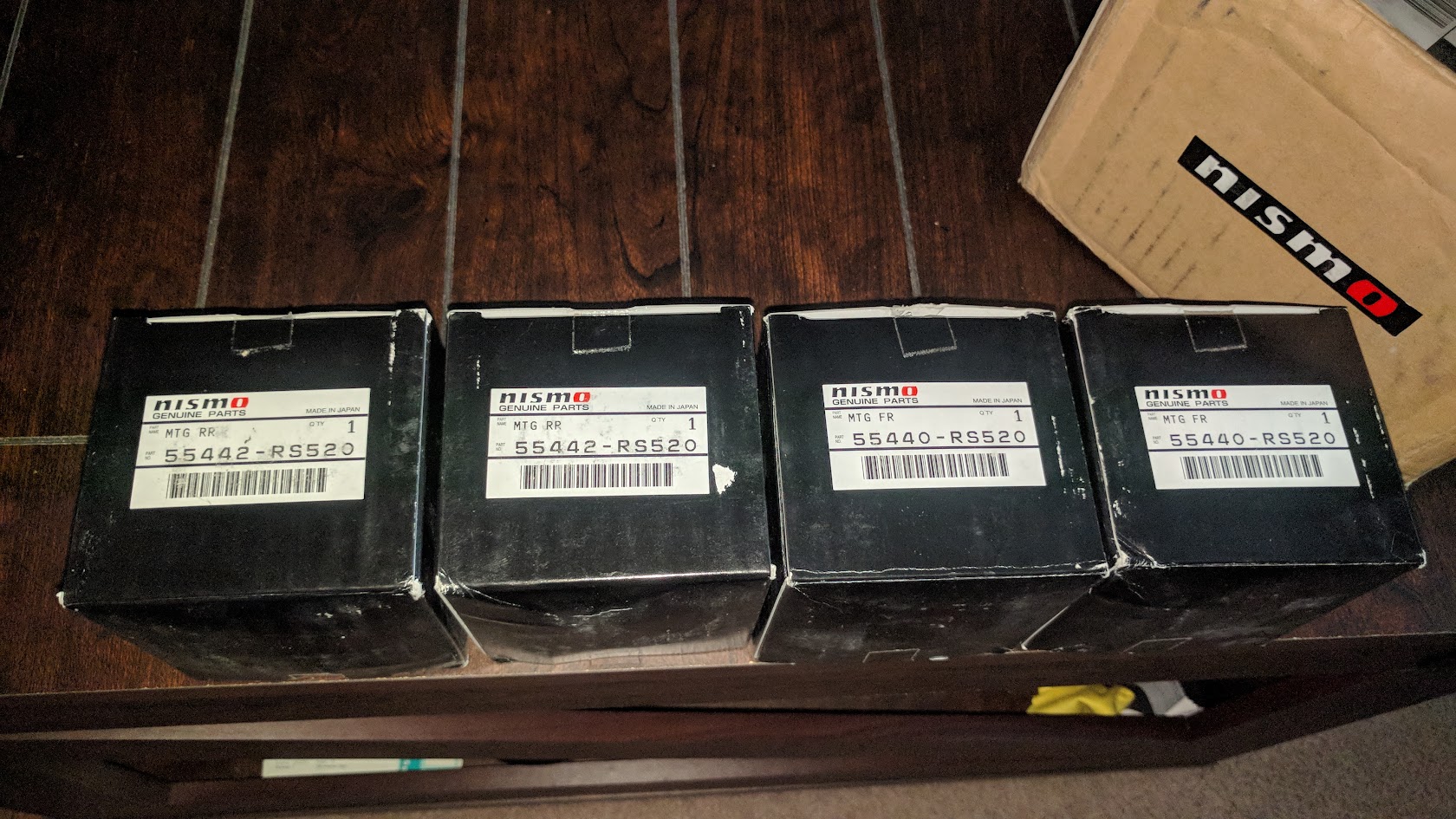 By the end of June Greg had some free time and I had enough parts to start attempt number 1 at KA-T. 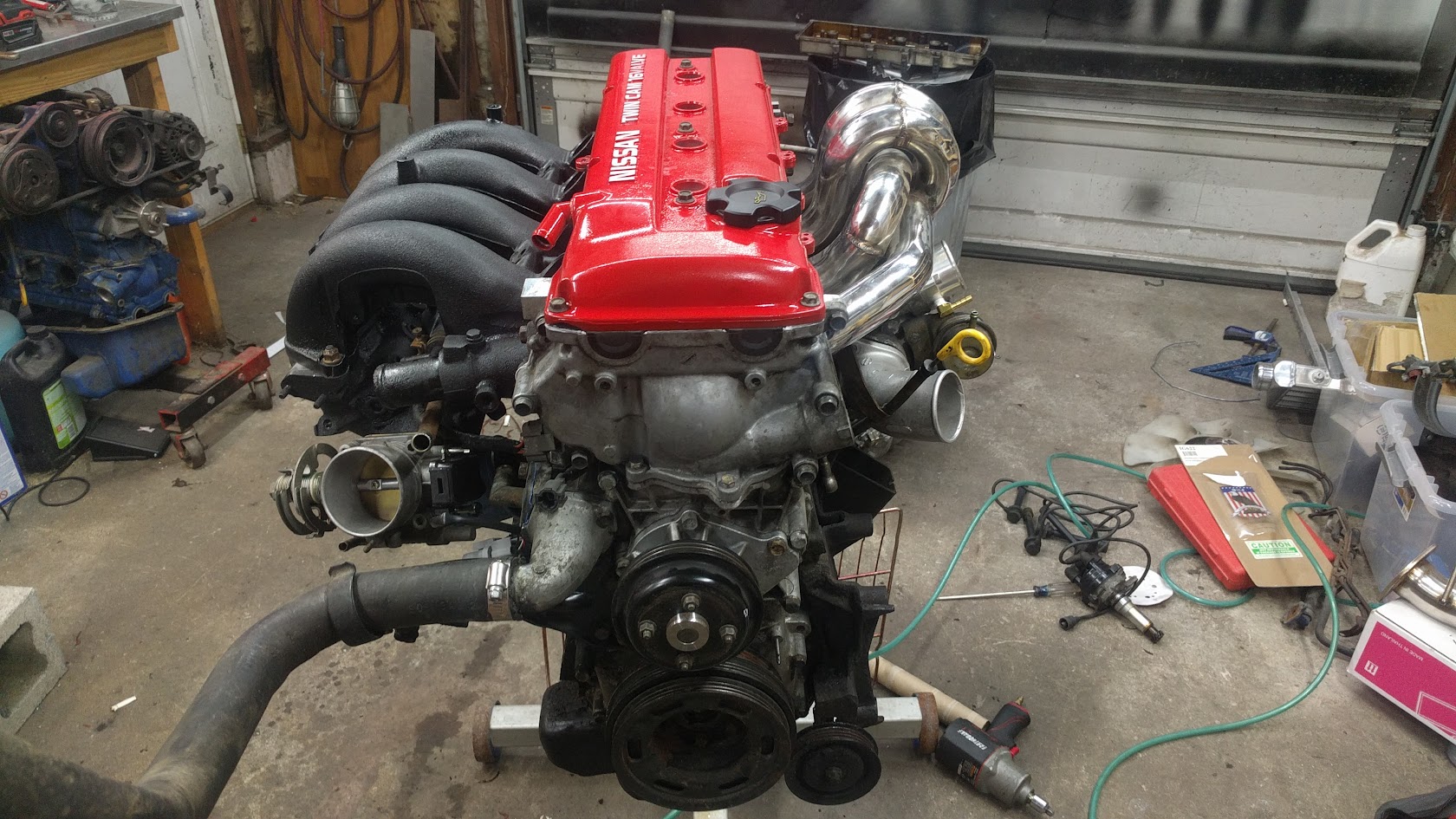 I lost the first valve cover to ignorance. I sand blasted the **** out of it, I was so proud about how clean it was. I showed Greg and the disappointment in his eyes made it clear, I ***** up. I got sand blast material in the tray on the inside. I spent some time attempting to clean it up but after drilling the rivets out I learned that was never going to work. We hung it on the wall of shame and coated the other valve cover. 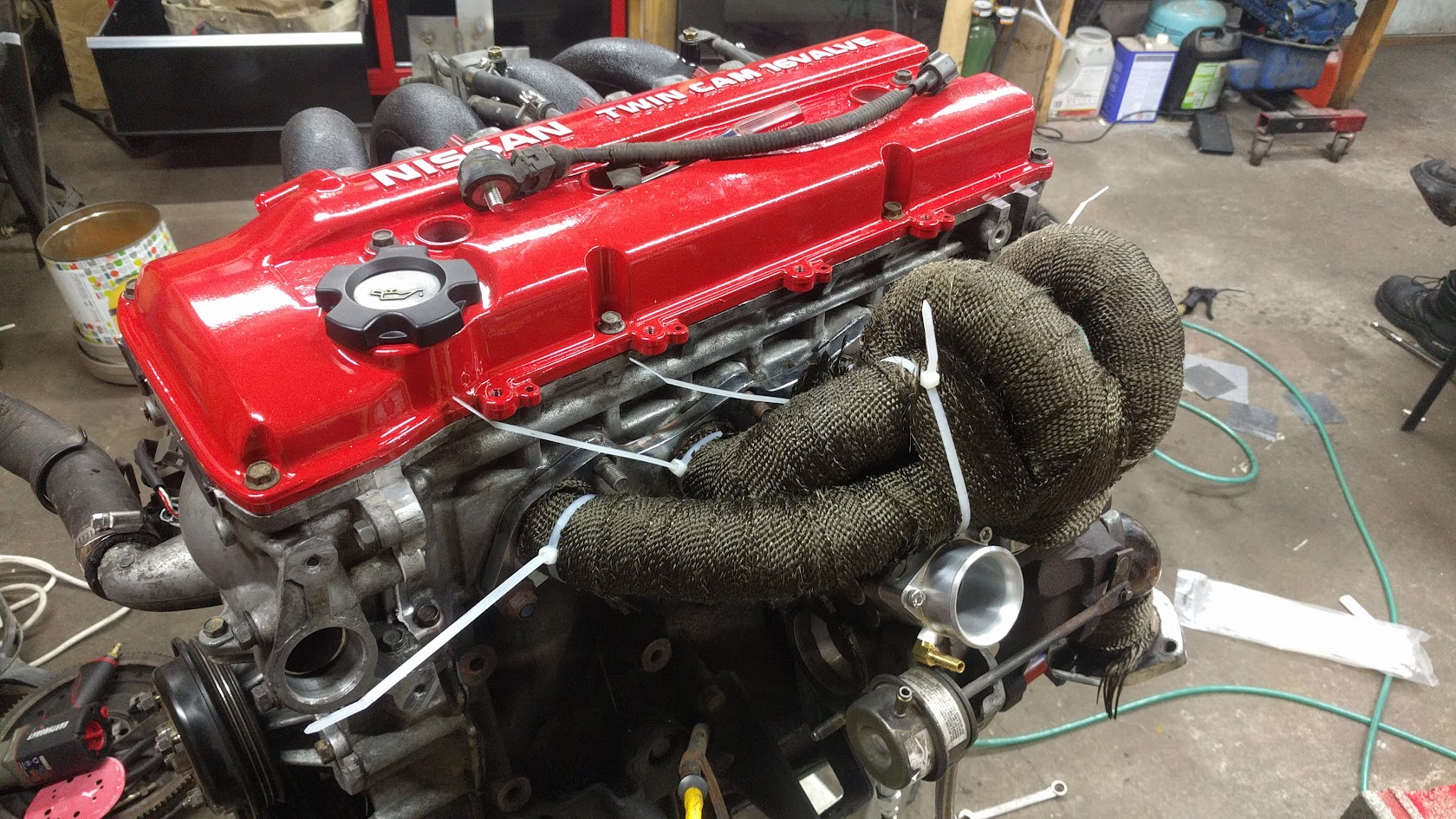 Learning to work with lava wrap. I don't think it came out bad but it is much thicker than I had anticipated.

From here we started putting things back together. The car was apart for approximately two weeks until it was to a point that we needed to be messing with Megasquirt. With some help from a neighbor we were able to get the car started and holding an idle. At this time I had not installed a few critical pieces which combined with my lack of tuning knowledge helped kill the ring lands. I was running no IAT Sensor and my Wideband was not in yet. I really didn't fully comprehend the importance of these components just yet, though I had book knowledge on them from either here, Zilvia, or Corky Bells Maximum boost. Eager to see it move, I drove it untuned and without proper sensors. More on this soon. 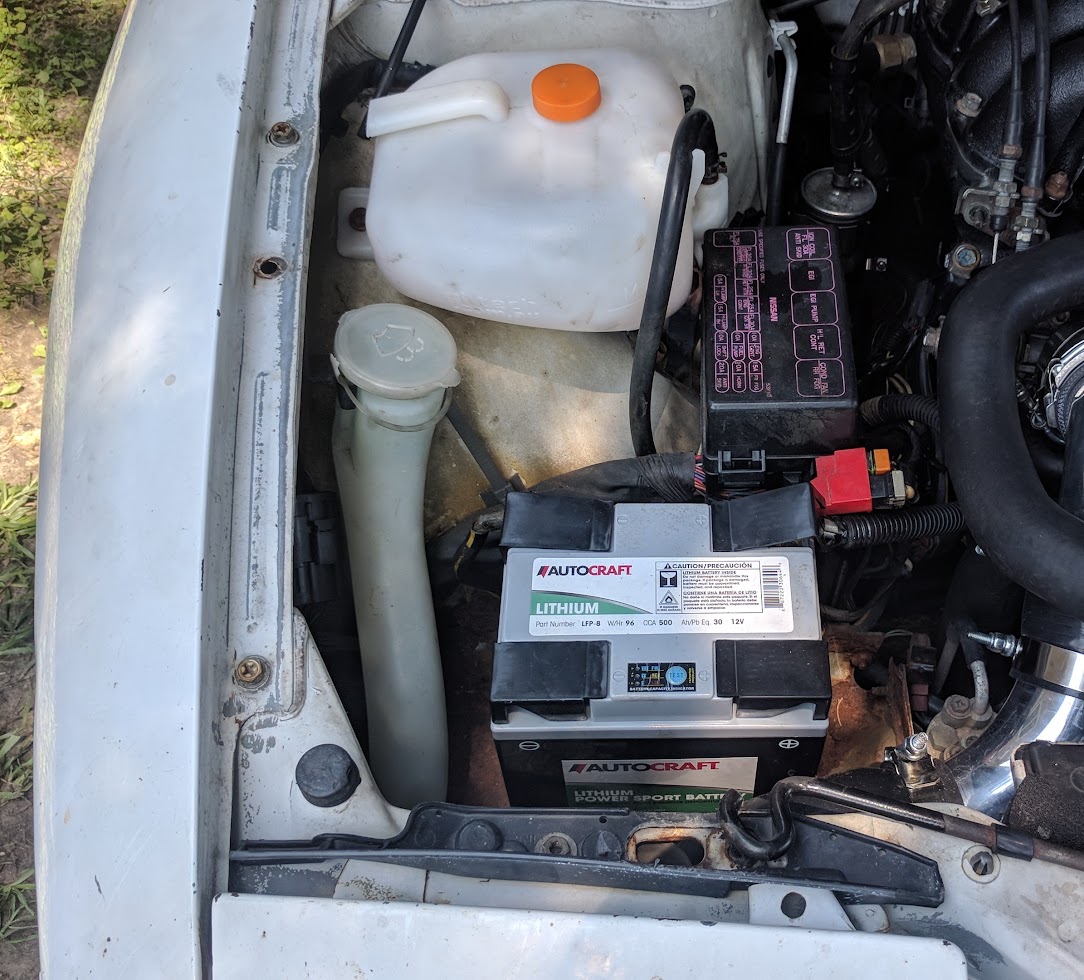 I really wanted this lithium battery to work for me. It was a huge weight savings (it weighs like 4lbs) but I think the constant charging once the car was running killed it. Only a few months after buying it and it no longer holds a charge. I will admit, during this time I had lots of issues with the car. Nearly all of them were caused by shortcuts or lack of understanding.

Prior to bringing the car home I put some miles on it near Greg's. The more miles I put on it, the harder I started to push it. The thrill of having a turbo 240 was everything I had dreamed of, even with small puffs of smoke becoming more apparent from the engine bay. I drove the car home, the entire time fighting with the car to keep it from stalling. 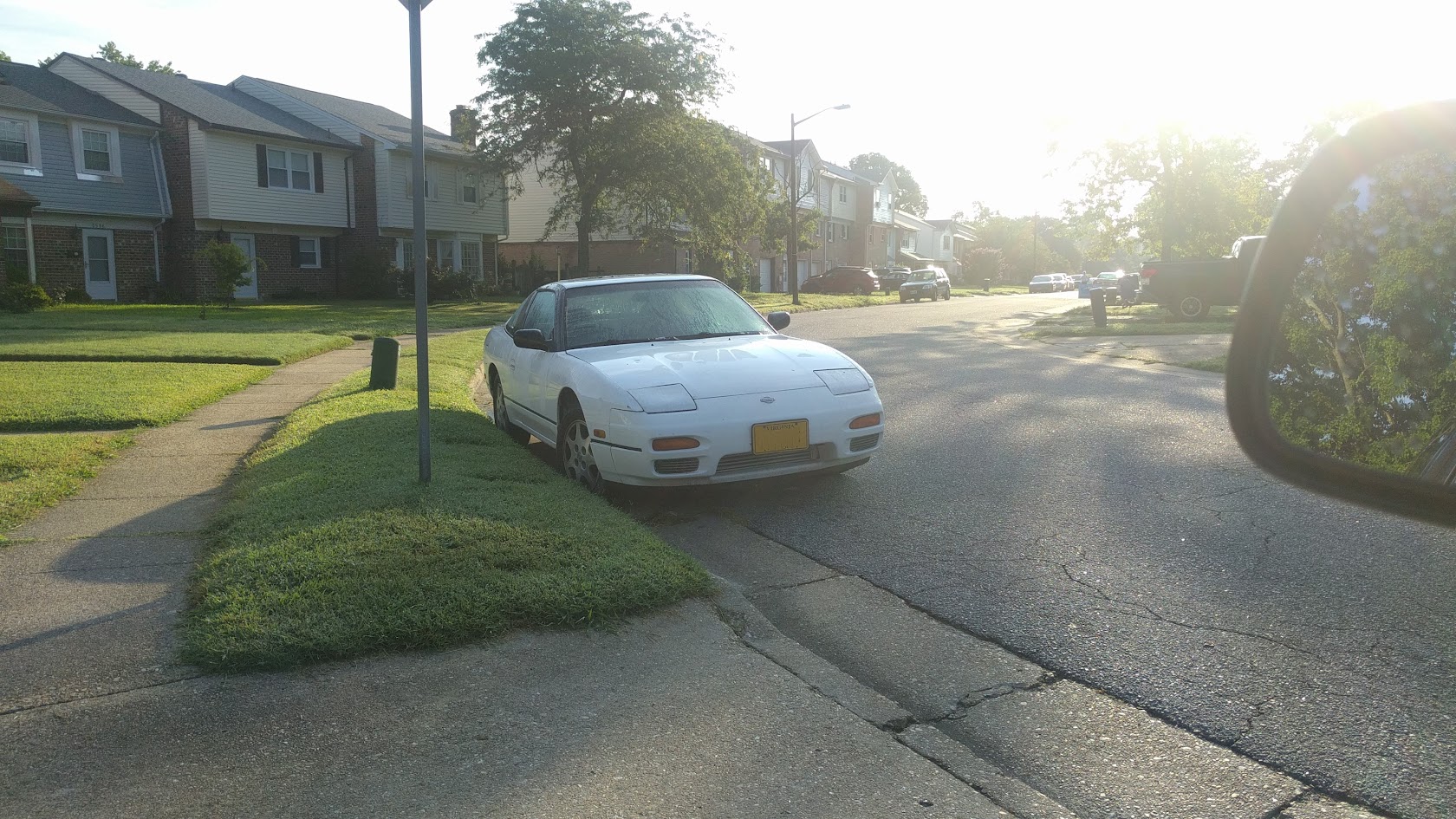 After some research I found the smoke from the engine bay was coming from the valve cover. More research brought me to drill out the PCV system on the side of the block and attach a catch can (VTA, 1 hose from PCV, one hose from Valve Cover). At this time I didn't know it for sure, but I was suspect of my ring lands from numerous threads saying they would crack doing what I had done. Realizing this meant I was rebuilding a motor, I continued on and put another 100-200 miles on the car until every time the car car hit boost my engine bay became soaked with oil.

By this time I had parked the car knowing I was at a fork in the road. Do this halfway again and end up with questionable results or learn from my mistakes and do a proper build. The car sat for the next 4-6 months while I decided if and when I was going to mess with it again.

A few months go by and Greg hits me up asking when we are building this 240? I instantly get the itch again. We get the 240 back to Greg's and pull the motor to be sent to the machine shop. By this time, Greg must have several thousand miles of towing experience with a 240 as his load.

After getting the specs from Abacus Racing I begin ordering parts. I hadn't convinced myself to do a "full" build at this point but nonetheless, part orders began.

As of this year I have begun tracking all my parts/maintenance in a spreadsheet. I plan to back date it with parts I had acquired before January of this year. I will share the spreadsheet itself if anyone is interested.


After some more research I don't know that the stud washers will work with my setup. I thought this is what people were saying to use instead of the stock ARP washers. I'll figure this out later I am sure. I ordered some parts from FRSport and wanted to take to the time to tell people, screw this place. When I owned my first 240 some 8 years ago I used them and never had issues, because of that I chose to purchase from them again. The experience has completely changed and I am still waiting on any sort of communication from them after ordering my ATI Super Damper.

Real Street Performance has been incredible. These guys are over achievers, big shout out to Hanz. 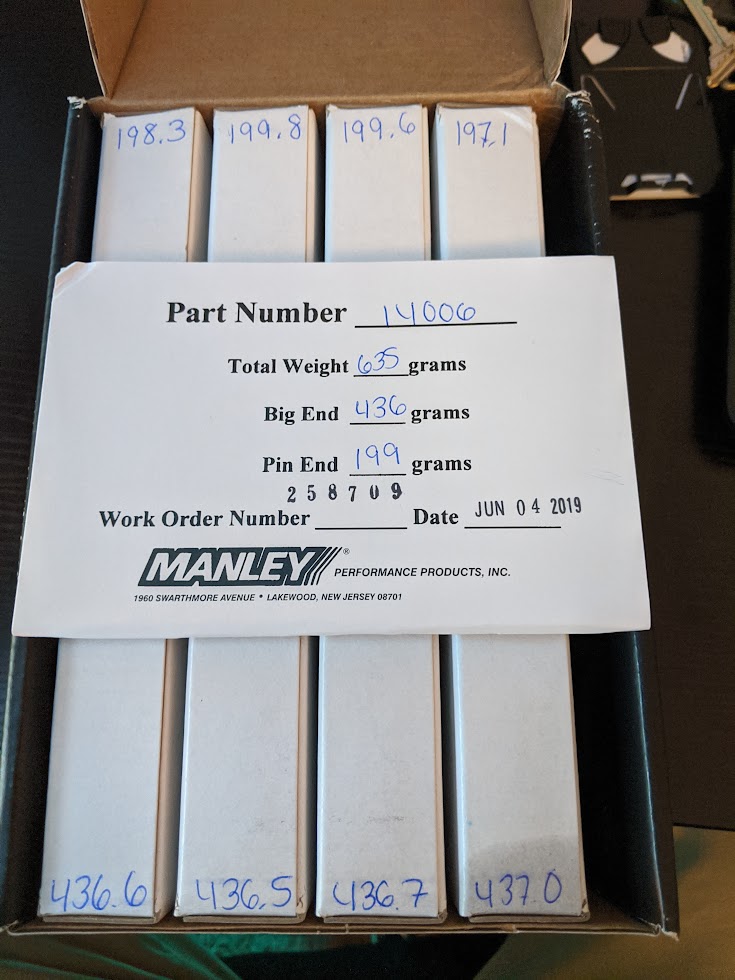 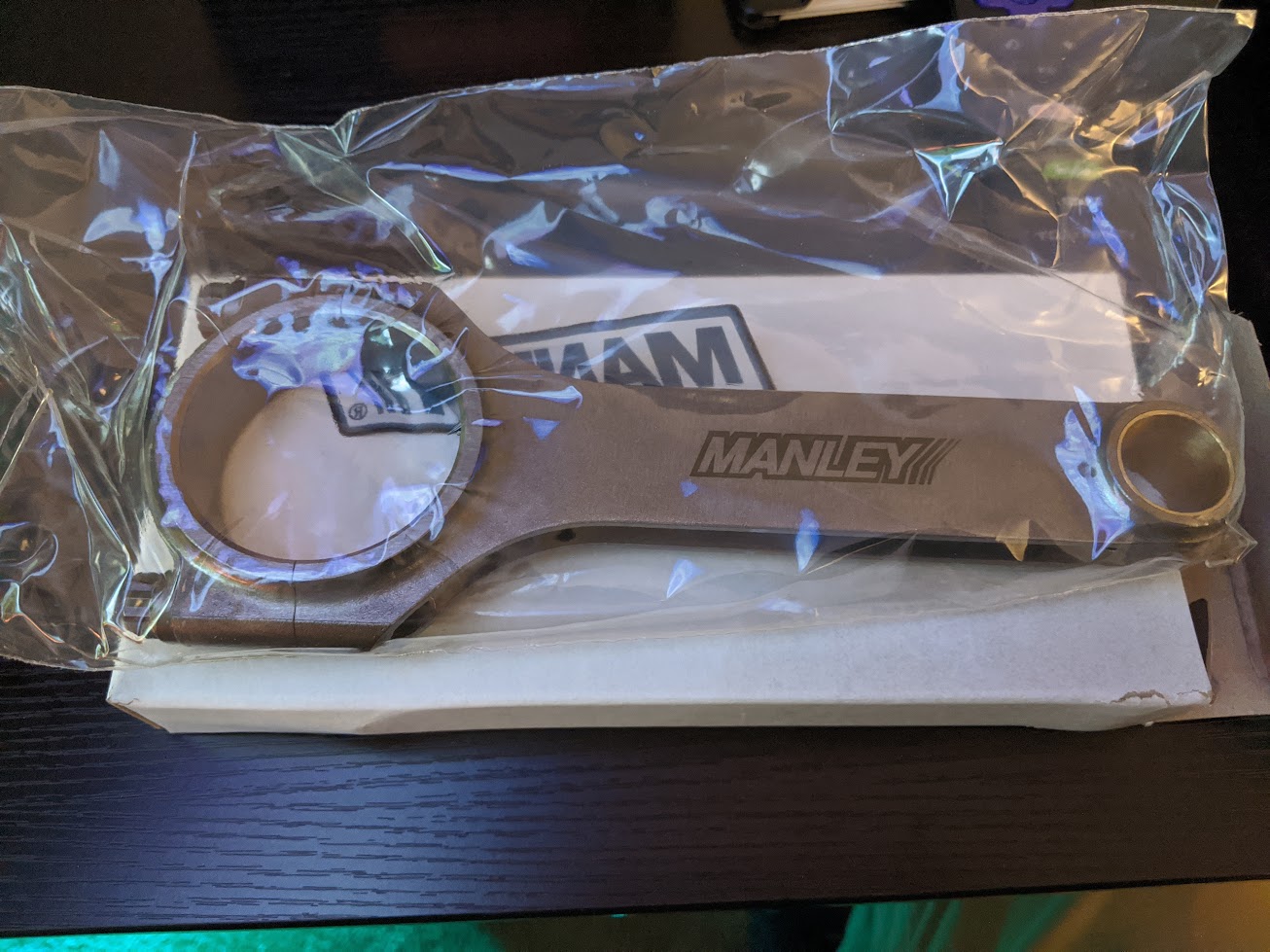 Bearings are not in the list at the moment because I am having difficulty locating STD King XP Race bearings. My builder sent me back with the standard ACL's I had before and I trust his opinion on the matter ( I have read to many forum posts arguing about race vs non race).

My plan as of writing this is as follows:

Get the motor back together, rings gapped for 20-25 psi of boost. Get it tuned and broken in properly. I will be running my T25 setup initially and I obviously wont be pushing those boost numbers. A T3 setup is the master plan, in particular a Full Race twin scroll setup.

While the motor sits at the I have been working on the rear subframe. Those Nismo bushings I purchased a year and a half ago are finally being installed.


Miscellaneous photos of parts and a few comments. I will be back to revise this later once we make some more progress. As is I am on the hunt for bearings. This seemed to be the most cost effective and easiest way to avoid having to hunt through two bags on engine bolts that were pretty beat. 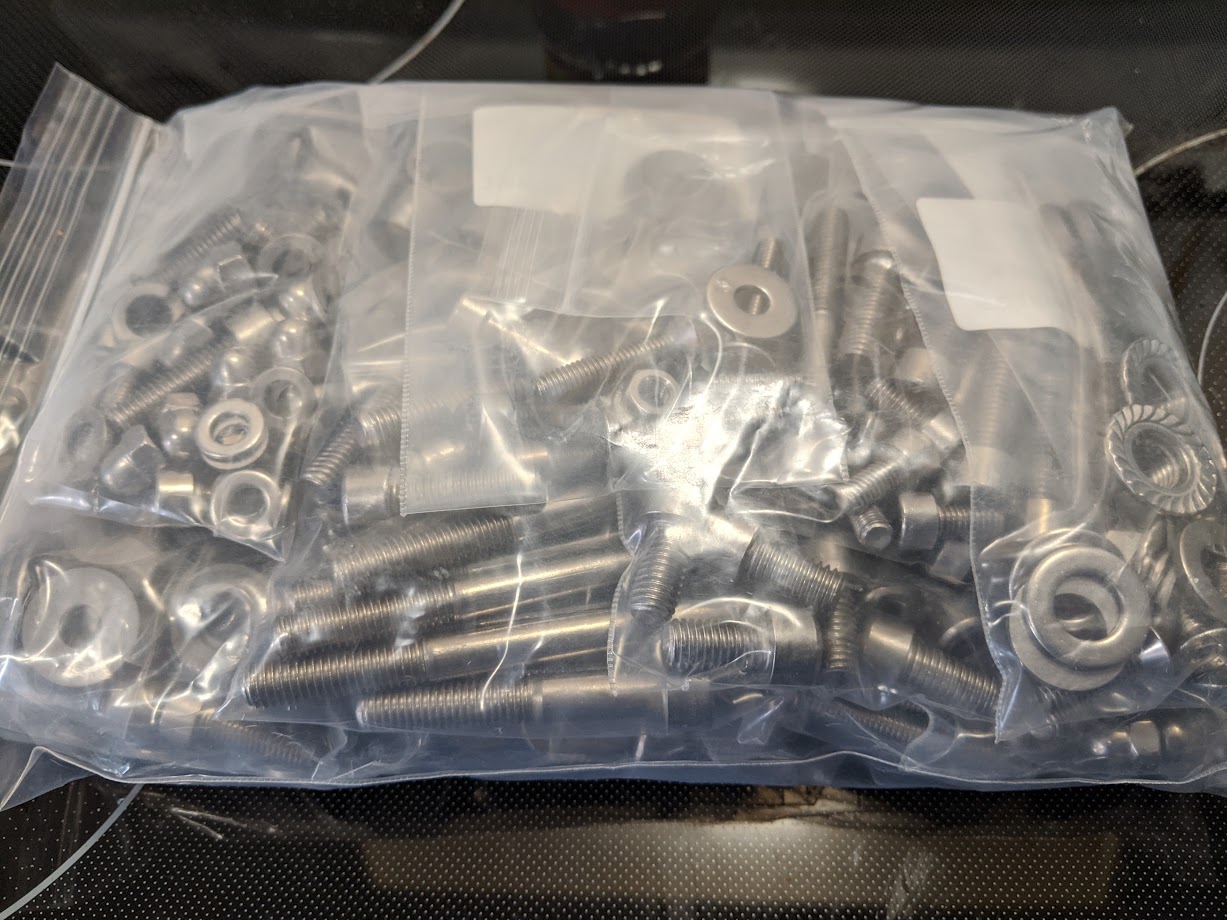 We tried a few different things but I was running out of time. I dropped it off to be powder coated black. In hindsight I think I should have ordered an infrared curing lamp.

I didn't originally plan on building the head but my builder says I should at least do springs and of course check the head. We will see if I do more than this. I plan on having some minor work done regardless. Well I did not expect to find one of these. 12 hours of driving later and its mine!!!

Small update - Just heard back from the machine shop and ordered intake seals and exhaust guides. I think that should be one of the last part orders (Motor related) for at least a little while. Went ahead and canceled my ATI Super Damper from FRSport after a month of trying to contact anyone. I re-ordered it through Real Street Performance and should have it in before I need it.