Hello Ka-t members. Looks like im about 10 years late to the party haha. I’ve searched up a lot of old threads that have answered most of my questions but I still have a few. Sorry this is going to be a long post any advice is greatly appreciated!

Goal: 500hp and reliability (Ya its going to be expensive)

Well unfortunately i already put the rotating assembly together before discovering this forum and now im worried my ring gaps are too tight after reading that other members run .018/.020 on their 500+hp cars.

I also see theres the head lifting issue which is remedied with larger headstuds and/or those inserts installed into the head. I bought the inserts and arp2000 10mm headstuds hoping this will be suffice in keeping the head down for my application.

Lastly I wanted to try and make this hp goal on a t2 manifold using a Gen 2 Gtx3071r. My engine came with a pieced together turbo kit using a t2 manifold and i wanted to retain it if possible. Please excuse my ignorance, this is my first turbo build. 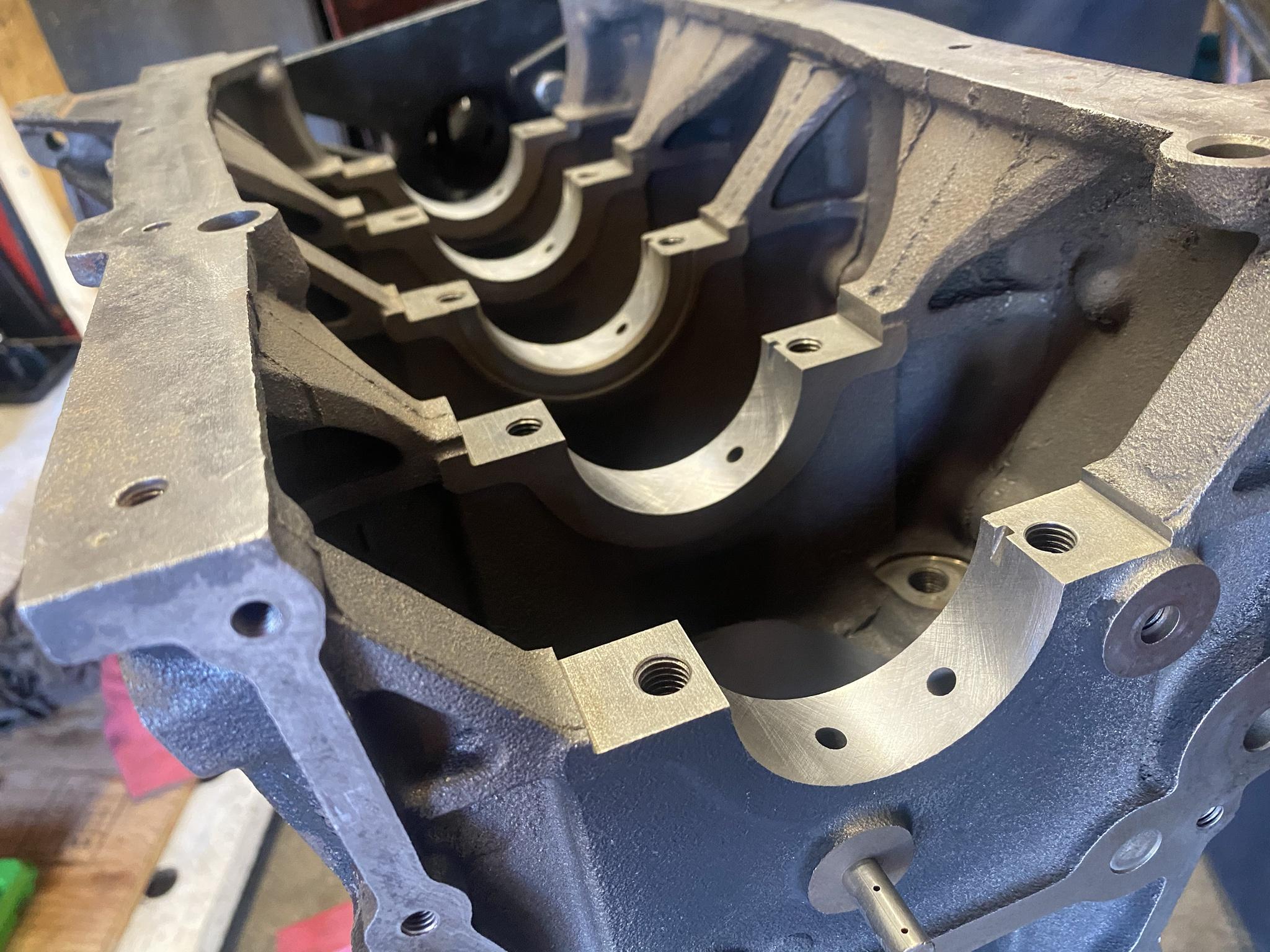 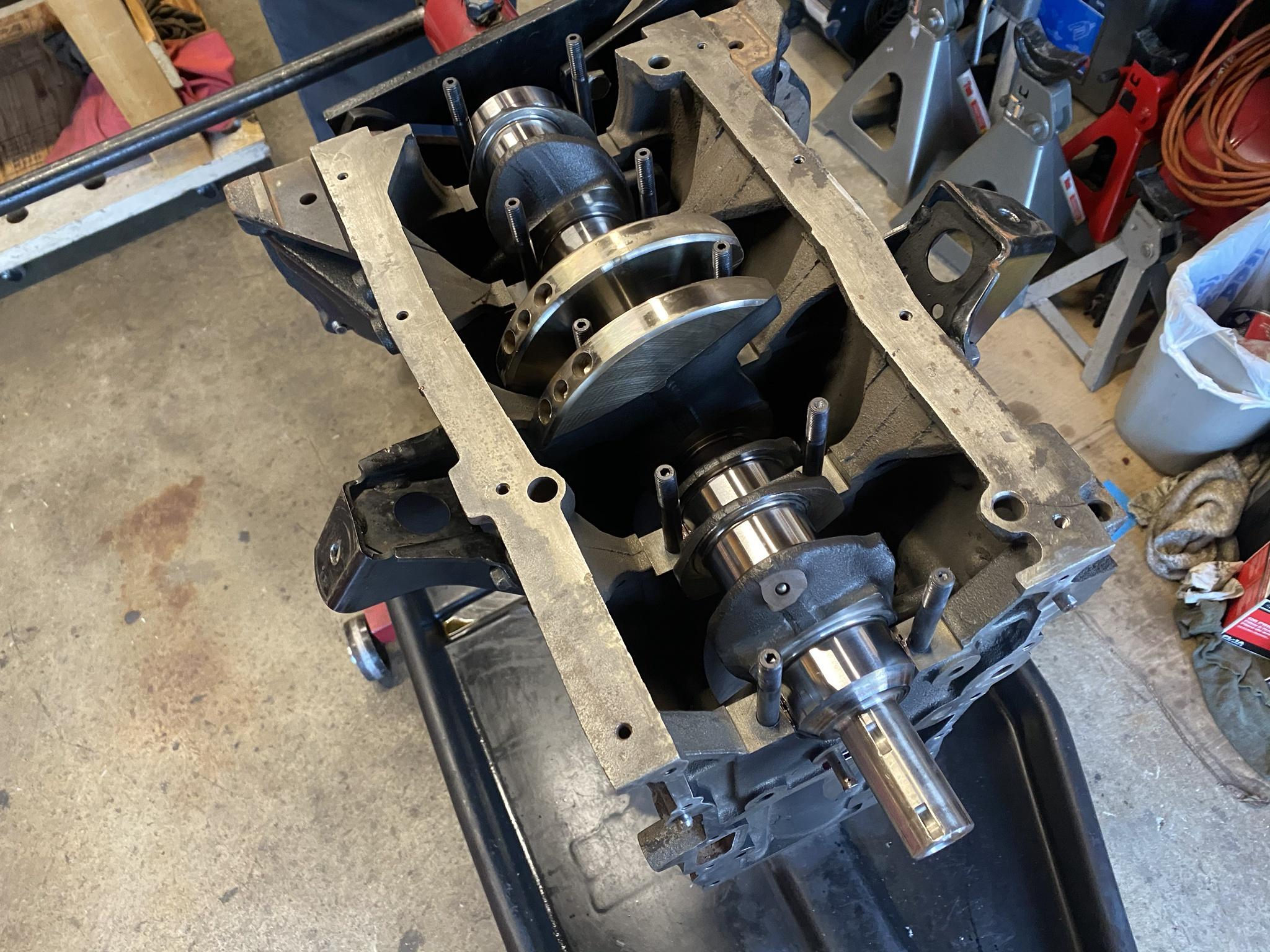 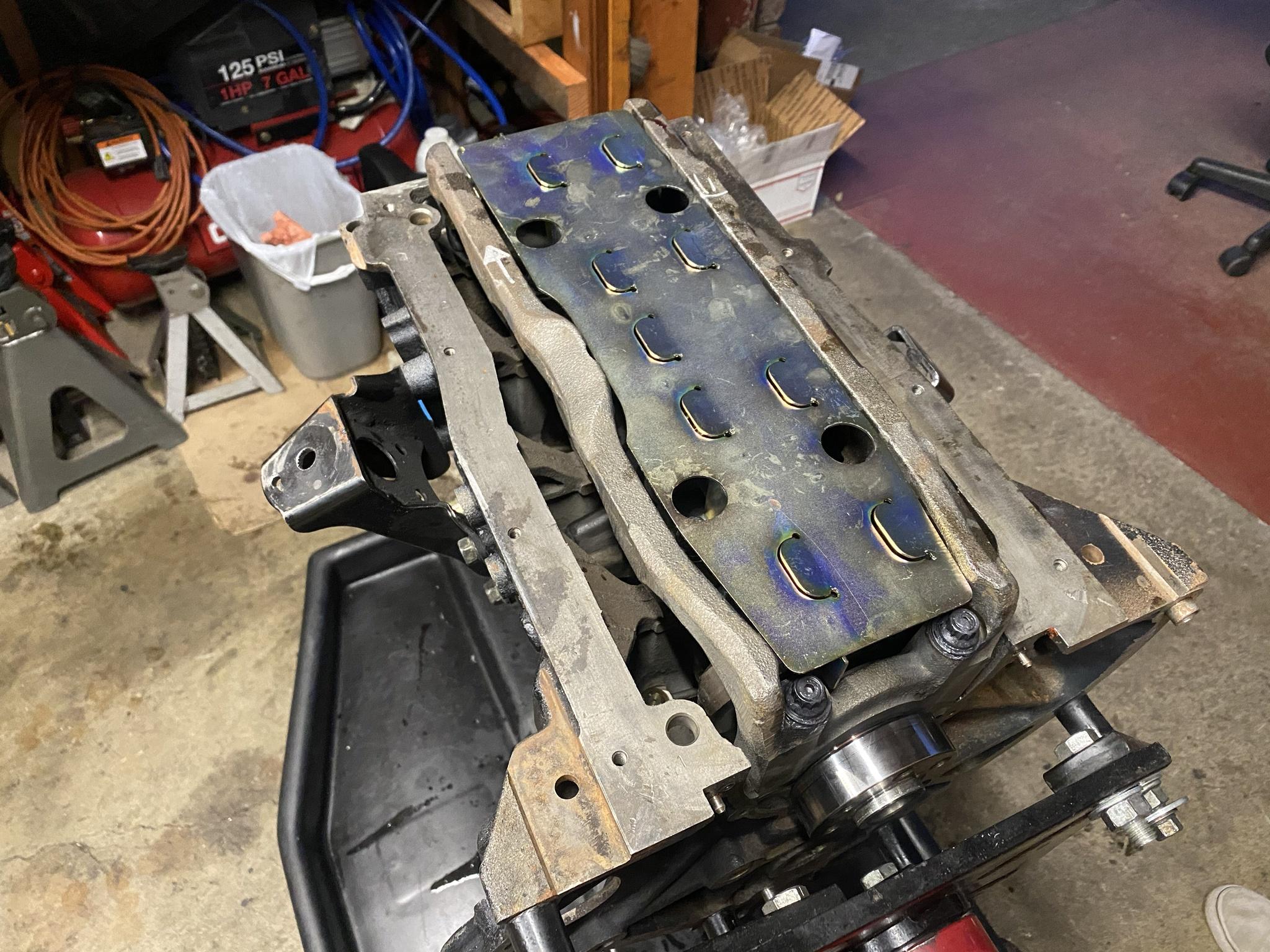 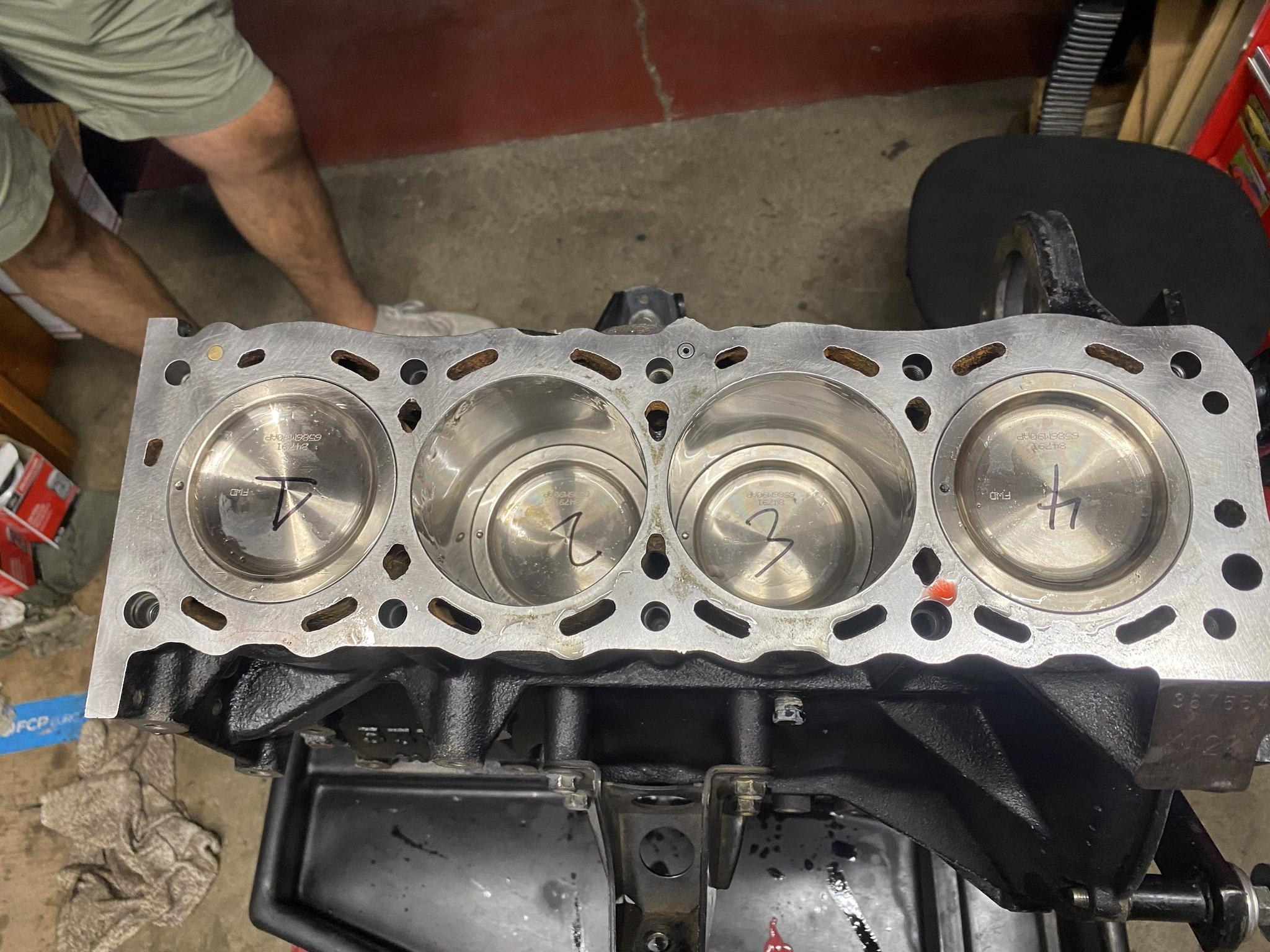 T2 mani is going to choke the engine higher in the revs imho. Youve got a tiny flange for your exhaust and a HUGE throttle body which is going to kill throttle response/control in lower revs. What are you building this for? High revs drag/drift stuff or responsive auto-x/scca/nasa street type use? Throttle body/cams say the former, t2 flanged turbo says the latter.
Top

NukeKS14 wrote: ↑Thu Sep 03, 2020 7:39 am T2 mani is going to choke the engine higher in the revs imho. Youve got a tiny flange for your exhaust and a HUGE throttle body which is going to kill throttle response/control in lower revs. What are you building this for? High revs drag/drift stuff or responsive auto-x/scca/nasa street type use? Throttle body/cams say the former, t2 flanged turbo says the latter.

Im building this car for road courses/sunday drive. I was hoping a .86 backend for the turbo would alleviate some of the choking. The rev limiter is probably going to be around 7800rpm.

I would personally stay with the stock IM and throttle body for your goals for throttle response and low-end. I'm sure others will disagree but the huge throttle body is going to make it act like a peaky boost monster. I'm building a KA for the same goals. Bc stage 2 cams and twin scroll T3 housing. I know people make high power on T2 housings but imho it'll breathe better with something in the t3 or t4 family. Your cams are going to shift your powerband to the right quite a bit too. Are you planning on running an Ati superdampr and fully balancing the rotating assy? I wouldnt push past 7k rpm w/o doing that. Look in the dyno section for my last dyno on my open housing t3 w/.82A/R borg Warner journal turbo. Ill update once I make it back on my twin scroll .78 A/R setup. Aiming for 500s on e85. Mid 400s on 93 octane
Top

I do still have the stock manifold and throttle body. I wouldnt mind getting dyno results for the xcessive plenum and the stock setup.

The roataing assembly is fully balanced and I do have the ATI damper. From BCs website it looks as if the low-mid tq loss isn’t too bad.

.018" Top ring, .019" second ring as recommended by Wiseco. (I'm running their 9.0:1 pistons in 89.5mm diameter. overbore was to control tolerances and ensure roundness of block as it was an unknown variable when I bought the car. Calculated compression ratio w/ head/block milled for flatness and 1.0mm Tomei head gasket comes to 9.59:1)

I wouldn't lay too hard on that plot. Too many other variables in play.

Here's my most recent dyno from the aforementioned thread. This is on a Borg Warner S257 SX-E journal bearing turbo. Hoping to gain a few hundred RPM of spool from switching to twin scroll manifold and reducing A/R from .82 to .78 divided housing. 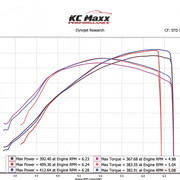 I think ill keep the gap the way it is then thanks. I took a look at your dyno thread, the numbers and power delivery looked great.

Clearance issues in my Non-ABS S14. nearly fixed. I'm speaking with Full-race about it right now but the thing is a solid 20 lbs and very well made. 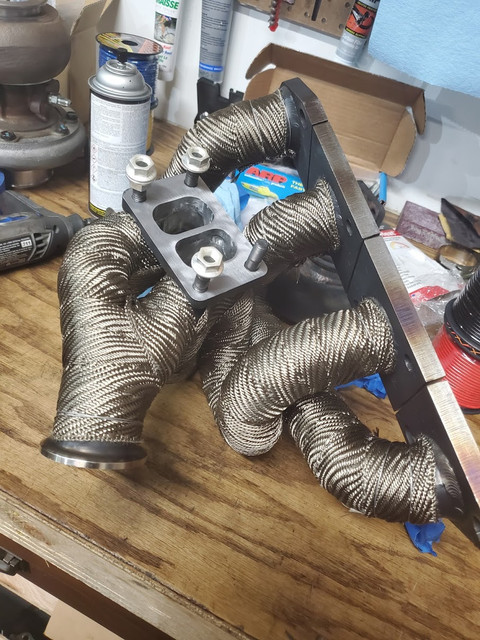 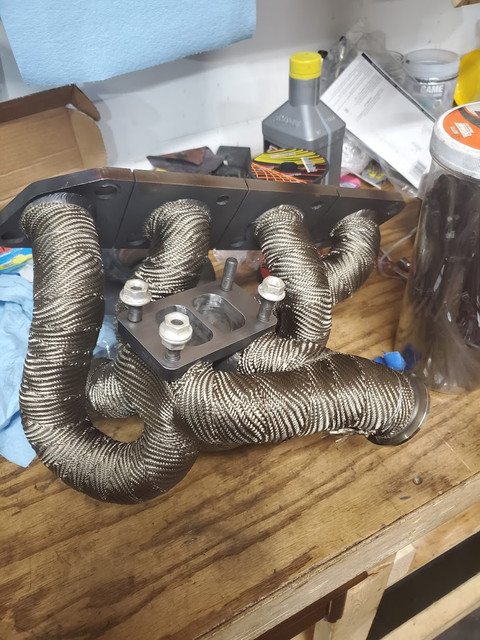 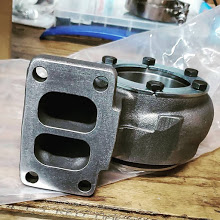 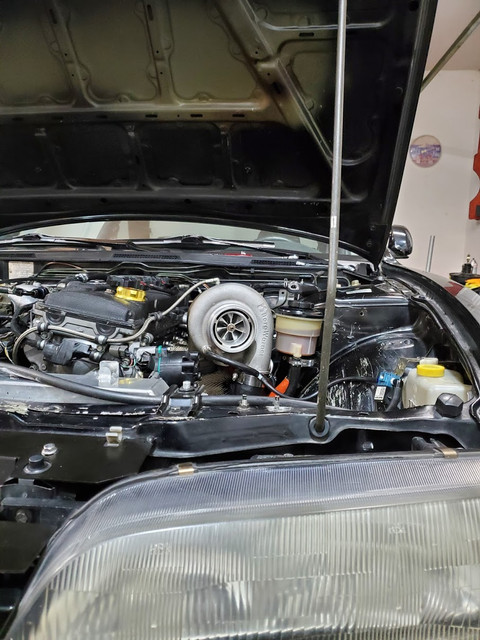 It's currently trying to burst through the hood on acceleration. Xcessive motor mounts got here today and I'll see if I can get the rest of the hood clearance I need from them.


my CX racing mani cracked after less than 10k miles. about 75 percent of the way around the radius of the wastegate tube at the collector and light cracking around a weld seam on my #1 primary. That's what happens when you use **** metal and don't backpurge I guess.
Top

Ya im sold. Full race it is. Is their downpipe the clearance issues your talking about? I read that you needed a z32 brake master cylinder for it to clear? Sorry for all the questions but now im excited. A twinscroll gtx3071r or G25-660 sounds great for this manifold. Im not too well versed in the BW turbos but i think ill start researching after seeing your dyno charts. Thanks again for all the help! Im gonna throw my turbo kit up for sale and that should at least cover halfish the price of manifold and downpipe.
1991 Nissan Sil40 R.I.P. (11/10/17 - 01/09/19)
1989 Nissan Sil40 Sold
1990 Nissan 240sx Sold
1990 Nissan Sil40 (Current)
1989 Nissan 240sx (Current)
Top

On the S14, there is a proportioning valve that sticks down at a 45 degree angle to the rear brakes. The wastegate sits there. I had to swap to a z32 BMC to clear, yes. I don't think the S13 has that issue, here's a pic; 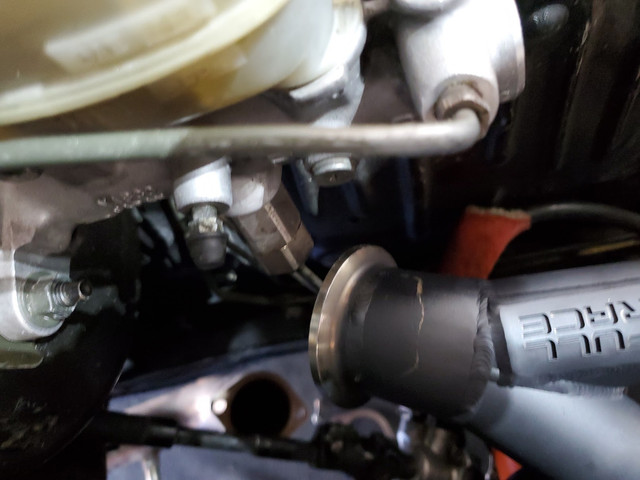 Second issue is the power steering lines. The #1 primary hits on both. I solved this by cutting off the 'pin' on the upper line so I could reclock it to clear. The lower line I'm using a pre-formed 5/8" ID silicone hose I snagged on Amazon. I'm using a 5/8" coupler to a silicone hose and I get plenty of clearance. That lower line is the supply from the ps reservoir to the pump so it doesn't see pressure. Regardless I don't think I'm going to have any issues here. I've got some fire sleeve for the portion that still runs close for some added protection. 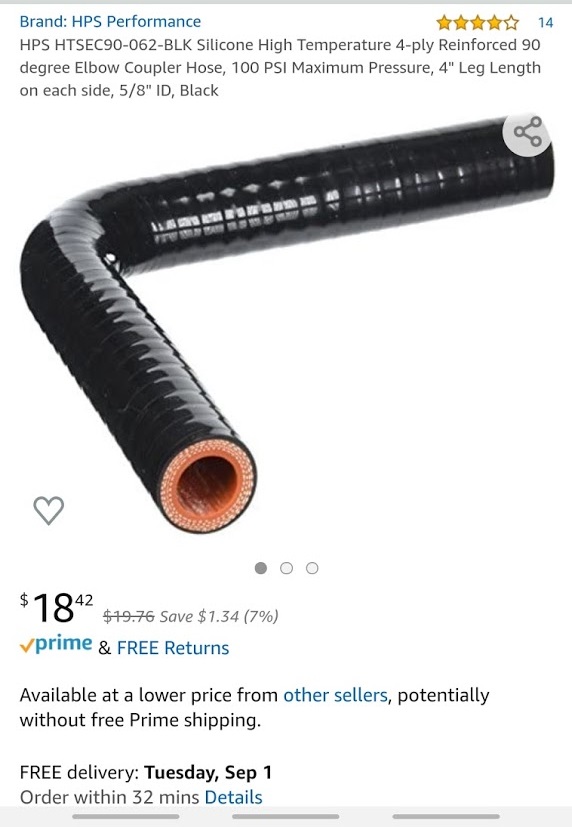 ^I used that thing and trimmed down one side with a razor so the 90 degree bend was close to the pump. 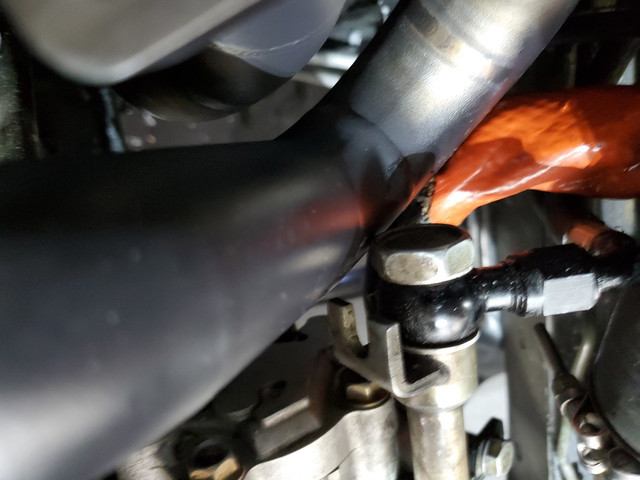 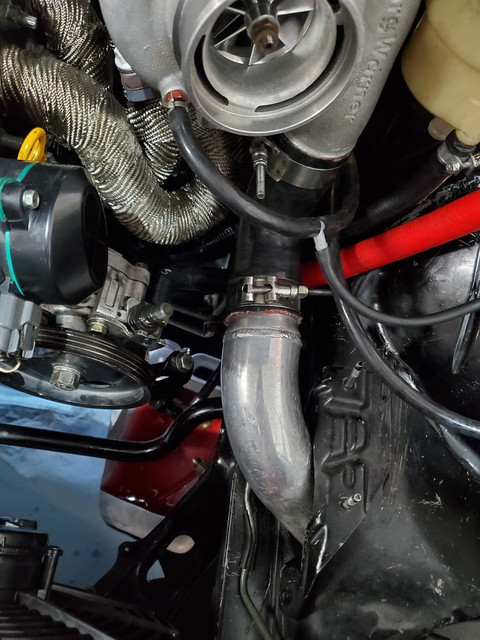 plenty of room on the lower. 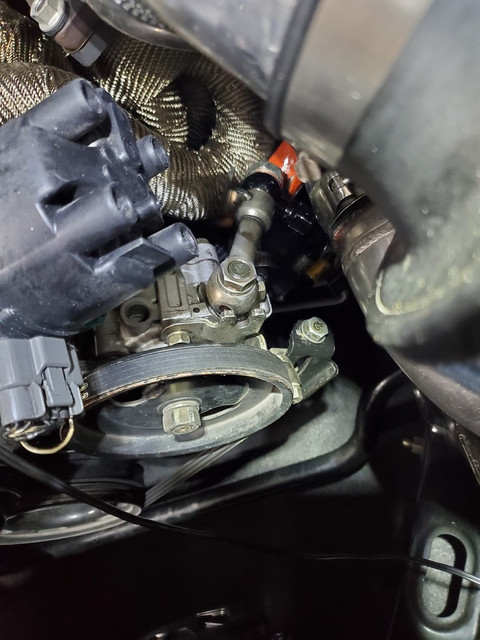 pics are out of order, this was me checking to see if my idea on reclocking the upper line would work before I started doing anything else. Not a great angle but there's about half an inch of clearance. I'll try to get more when I put everything back together.


The last issue is hood clearance. I'm on P2M style motor mounts with no shims. I have maybe 3/8" - 5/8" of clearance between the crossmember and oil pan. I'll let you know how the clearance is with the Xcessive motor mounts but they drop the engine 3/4" according to them so I'll be shimming to add clearance (still have the four 1/4" shims that came with the motor mounts so I can add a half inch back on each side. I don't think I'm going to go much below 1/4" clearance on the crossmember to oil pan for motor deflection so I may have to notch the hood as last resort.)

I'm in contact w/ Full-race and sent my info over about everything. It's only been a couple of days at this point so I'm not sure where talks are headed. They should be able to angle the #1 primary a little better for the power steering lines and if they reclock the wastegate down and inward, they'll still have plenty of clearance between the downpipe and steering shaft.

Having said that, you're also going to have to make a section of exhaust to connect their downpipe to your catback. They terminate their downpipe in a 3" 3-bolt flange. Most if not all of the SR downpipes that I could find terminated in a 2.5" flange and necked out to 3". I couldn't find anything purely 3" so, take that into consideration. You're going to want a flex section in there too. The XS downpipe I had luckily was pretty close so I ground off the welds on their 2-bolt flange, cleaned everything up, and marked it for my buddy to weld. An exhaust shop should be able to make something. Good 3" 3bolt SS flanges aren't super cheap but, hey, why start cutting corners now?


They need to know exactly what turbo and housing your running before they can make the exhaust too. If you haven't bought one yet, and you're dead set on Garrett, I was going to suggest looking at a G25 unit. I do believe Full-race can produce this manifold in a V-band twin scroll housing.
Top

Gotcha so for me the brake master cylinder should be fine. I have the chase bays power steering kit and the high pressure hose looks good but i might have to modify the low pressure hose as well. This image is of SR lines but theyre close to the KA. 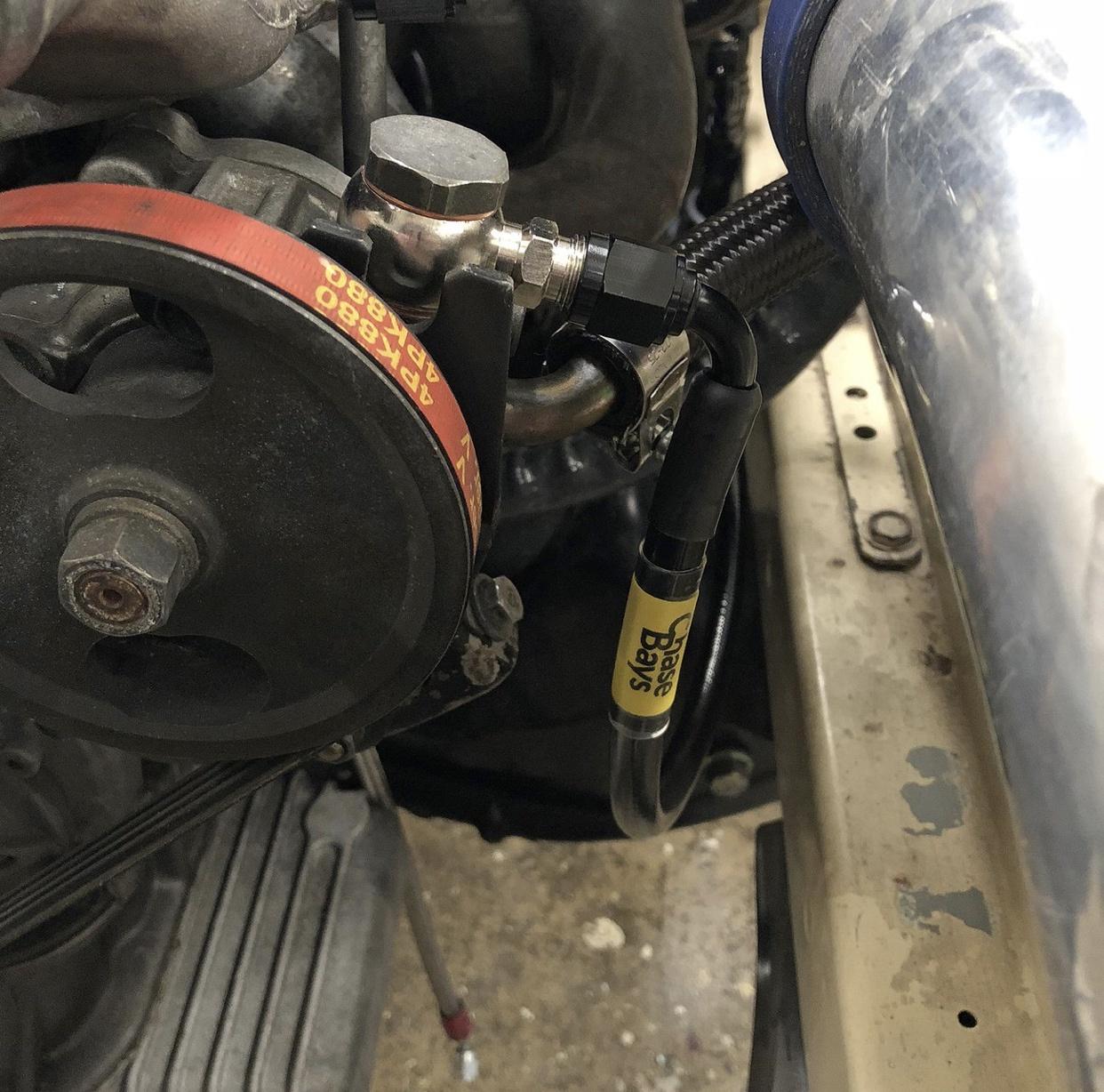 Its unfortunate the turbo isn’t clearing the hood. I absolutely dont want to cut into the hood nor make the oil pan lower then the subframe. Ill be keeping an eye on your threads to see if the excessive lowering mounts and some shims will be suffice. I didnt want to use poly motor mounts due to the vibrations. Supposedly even the 60A urethane mounts are aggressive. My plan was to use stock motor mounts with some window weld in between the grooves.

I looked into the G25 turbos and it doesn’t look like they offer a divide v band inlet or any divided inlet. So I’m wondering if they figured the G series turbo are so efficient there was no need for a divided housing? I don’t know.

Exhaust work is no problem at all. Ill have a flex pipe added.

So I used just the driver's side Xcessive mount at this point. The oil pan is a touch lower than the crossmember on the driver's side now but there is adequate clearance between crossmember and PS rack to oil pan. It also did give me enough hood clearance for the turbo. I'll grab pics later, my coolant pump decided to **** out and I'll be out replacing it today before it gets too hot.

Good findings. So the engine is slightly more tilted now. Just making sure, the oil in the pan wouldn’t hinder or cover the oil return line correct?

I’ve been thinking more about the Xcessive manifold and they do offer 50mm velocity stacks for it. I was thinking it may alleviate some of the torque loss due to it extending the runners slightly? 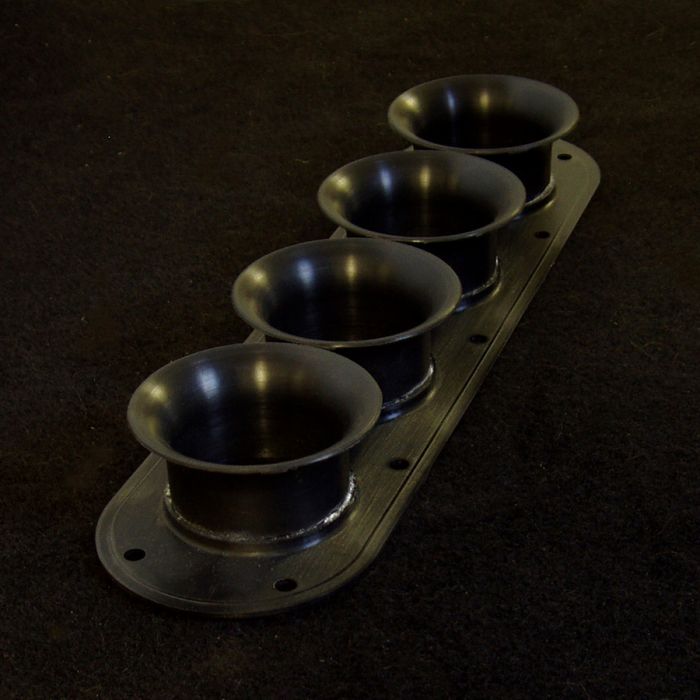 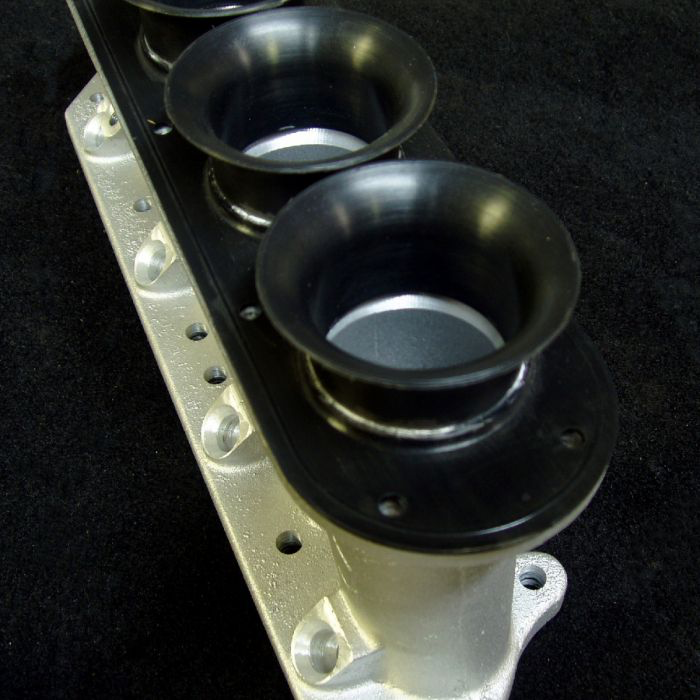 Ill keep updating this thread for people searching for answers like I was.

I contacted Full Race about getting their manifold with a V-band flange but they said they can only offer it with the the T3 divided housing. No big deal, the G series turbo has a T3 option with a .92 backend.